Last week, I finally got around to analyzing a change to the Late Answers review queue. For those who aren't familiar with Stack Exchange, review queues give experienced users a chance to look over posts from new users for problems that can be corrected or hidden gems. The later is particularly important for answers that come over a month after a question was asked, since those answers often get ignored. Increasing the pool of new users eligible for consideration seemed like a good way to combat the commonly-held perception that Stack Overflow is rude.

My main concern was that by adding more reviews, we might get into a situation where more answers were being added to the queue than the reviewers could handle. That can be a problem since ever-growing queues demoralize reviewers. So most of my analysis was geared toward predicting how many extra tasks my change would create. By my estimate, it would add roughly 300 tasks a day on Stack Overflow and maybe a dozen on other large sites. Given Stack Overflow users review tens of thousands of posts a day, these numbers seemed manageable.

After this analysis, I consulted a colleague and decided to just change the site setting and see what happens: 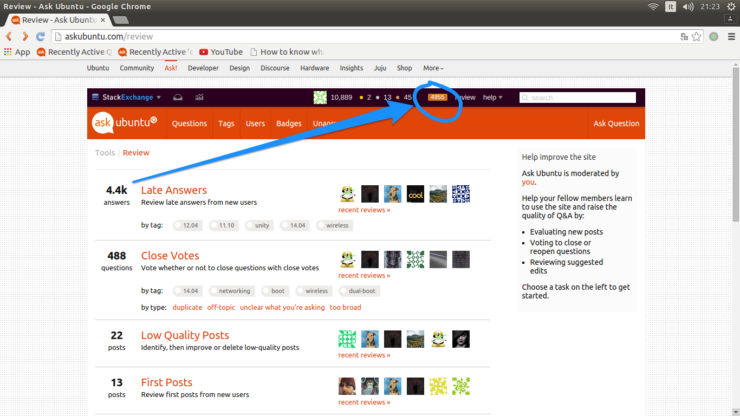 So my estimate was about 4 orders of magnitude wrong. With a single change of a variable, I'd increased this site's outstanding reviews 10 fold. And I'd made the change on every site on the network. Not only that, but there is no easy way to remove review tasks except by, well, reviewing them. I'd managed to inadvertently create a bunch of work for thousands of people. My immediate reaction was panic.

Then I got down to business figuring out what had happened. It quickly was clear that the change picked up late answers that were older than a day. Initially, I thought the code was only picking up a month's worth of posts (more on this later), but comments on my answer fixed my misunderstanding. In fact, the change put all answers ever that fit the new criteria up for review.

Meanwhile, I'd notified the network's moderators of the change and, thanks to their encouragement, featured the meta post describing the change on the sidebar across the network. Many sites had already started noticing the change and answering the meta questions became an addition task for moderators and involved users. I couldn't keep up with those posts, but looking back a week later it's gratifying to see so many informed (and considered) answers from other users.

Also meanwhile, people were working hard to remove tasks from the queue: 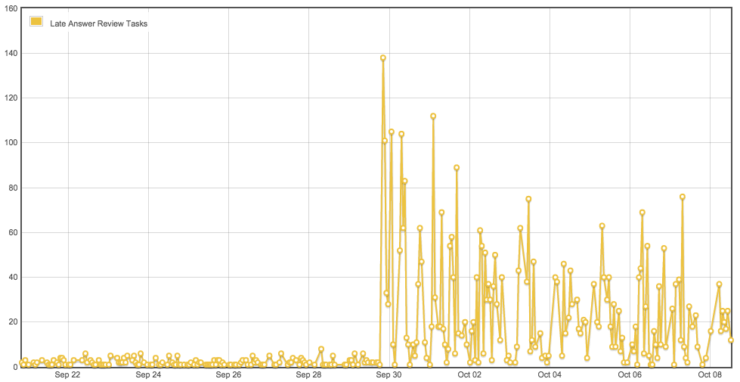 This activity is on Ask Ubuntu, but I could show similar charts from all sorts of sites. Traditionally, Late Answers tend to be a backwater of the review queues, so the sudden spike was a rare opportunity to earn badges for that queue. The week before my change, there were 5 Custodian badges—the bronze level for doing just one review. In the following week:

The Steward badge requires 1,000 Reviews, which is pretty hard to accomplish when there are only 300 or so a week divided among hundreds of interested users.

As the initial crisis began to die down, I started to wonder why Stack Overflow hadn't exploded. The answer, which I'd noticed in the code before starting research:

So I was saved by a special case that was, no doubt, built in for just this purpose. On Stack Overflow, the code does not consider answers older than a week, so it only spiked to 1500 or so. Why did I think the code looked back 30 days? I don't really know, but I think I got that from the definition of a "late answer": 30 days after the question was asked.

I'd really like to see about increasing the reputation level to 100. But before I do that, I really should take advantage of the natural experiment created by the change to 50. How did people handle the flood of late answers? Overall, did we find hidden gems or just superfluous answers? In the weeks to come, will people who benefited from upvoted answers in this queue tend to contribute more and better answers? Or has the feedback come too late?

« How to vacation like a community manager. If at first you don't succeed . . . »