To preface: I joined College Confidential in January. The company I work for took over management of the site in December and implemented a new registration system to begin integrating with our other products. Last April the previous owner of the site implemented a new theme. The new theme has had a lot of benefits. Chief among them: the site now works on phones. But I believe the cost of the changes in terms of usability has been high. The good news is we can fix it.

Using the Wayback Machine, we can see what the site looked like last year: 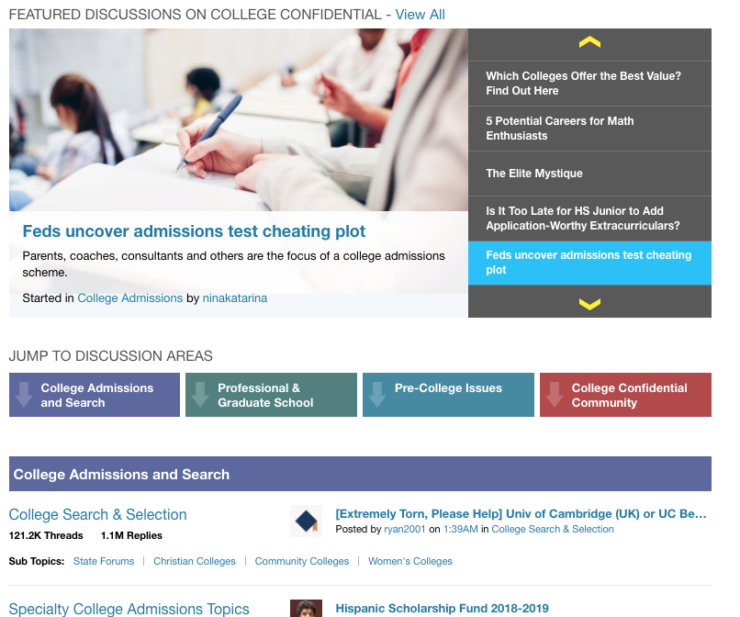 I've cropped out the topbar, sidebar and other navigation hints. This is the core experience of browsing our discussions. Here's what that same general area looks like now: 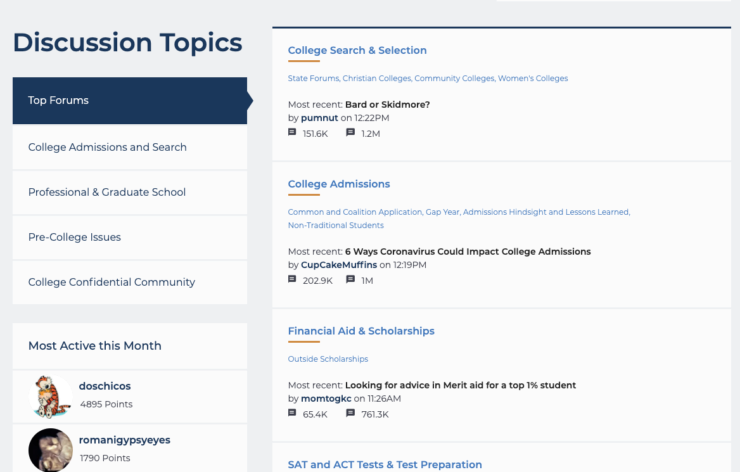 For this image, I've cropped out everything above the fold where we highlight content. The new theme allows that to take up far more space than the previous design. It also spends far less space on the discussion topics since it hides most of them behind a menu ("Top Forums", "College Admissions and Search", etc.). To summarize the effect:

Vanilla gives us a look back over the previous year1 in their dashboard:

If you look at the greyed out graphs at the top of the image, you can see we haven't lost much in terms of users. We always get a lot of new people in December and March. This year is no different. What is different is we aren't seeing the usual increase in new threads. That means there are fewer than normal new replies, which means we have fewer pages for people to look at. That means fewer pageviews, which is the number we are tracking to meet our goals.

Now there are many possible reasons for this:

I can't (yet?) prove the design is the primary culprit, but I do see some evidence pointing in that direction.

DC Urban Moms (and Dads) don't like our site

Brace yourself. Here are some quotes from a thread called What Happened to College Confidential?

That's a lot, but the picture it paints is that it's hard to find the useful information CC has because of the unfamiliar navigation system. Now to be clear, DCUM4 is the oldest of old-school forums. Of course people who post there are going to hate newer designs. But that's a big part of our audience too. And it's likely the audience who prefers the older design has been most active posting new threads too. (Plus the design is objectively bad as I will demonstrate momentarily.)

This anecdotal data also points to the other possible causes I mentioned previously. Perhaps the theme, as the most visible aspect of the site, is mentioned more often than other problems. Still, I don't see anyone defending the design or the registration system. And we have fixed most of the problems people had registering, so it's probably not as much an issue as it was in December when there were some problems. No, I'd say the problem is that we done messed up the design.

An aside about whitespace

I've seen a ton of user feedback about design changes and it's almost universal that someone will complain about "wasted whitespace". Sure enough: "Way too much whitespace when reading on my phone." Designers seem to hear this criticism to mean something like:

And if that were what users meant, I'd agree we can totally ignore the criticism. But it's not what they mean. Instead the internal dialog goes something like:

Hmmm... This site has changed. Looks like there's more empty space on the page. Let's see... where'd they put [feature]? Is it in the topbar? Nope. Sidebar? Not that I can see. You know it would fit pretty well in that empty spot. Why is it empty over there? I bet the designer likes Apple products. How is anyone supposed to know you can swipe down to get a menu? Honestly, I don't understand why they don't just use the space on the page instead of hiding everything.

This is pageviews we've seen in the UC Irvine section of our forums according to Google Analytics. The spikes pretty much align with the influx of admission decisions from the school. In fact, we get a fair amount of of traffic from Google via searches such as "uc irvine decision"5 where we are the fourth result. The 2020 spike is smaller than the 2019 spike. But what's more troubling is the 2020 spike is pretty much all the traffic we are getting. If I had to guess, it seems like people aren't looking at other threads in the UCI topic. The analytics bear that out:

So you can see plenty of traffic in the class of 2024 discussion (which obviously didn't exist in 2019). But the traffic to the UCI topic page disappeared. Again, there's a UI reason for this: 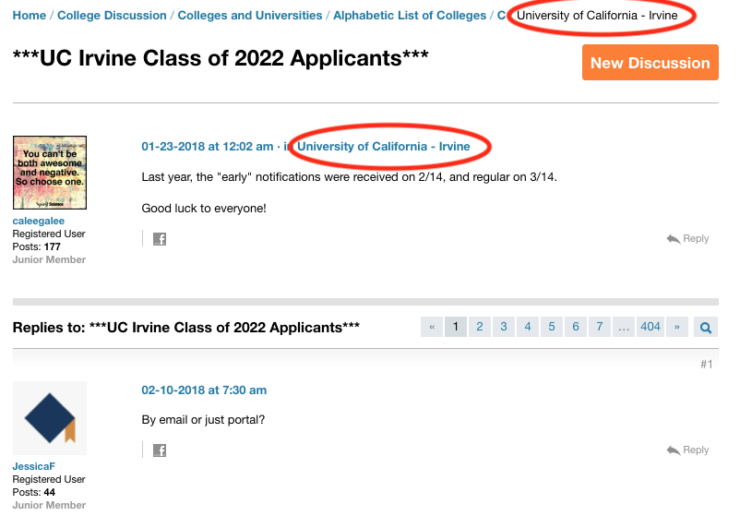 It's relatively easy to find the topic the discussion is in and the hierarchy of the site. Maybe not as good as it could be, but it's usable. Compare that to today's view: 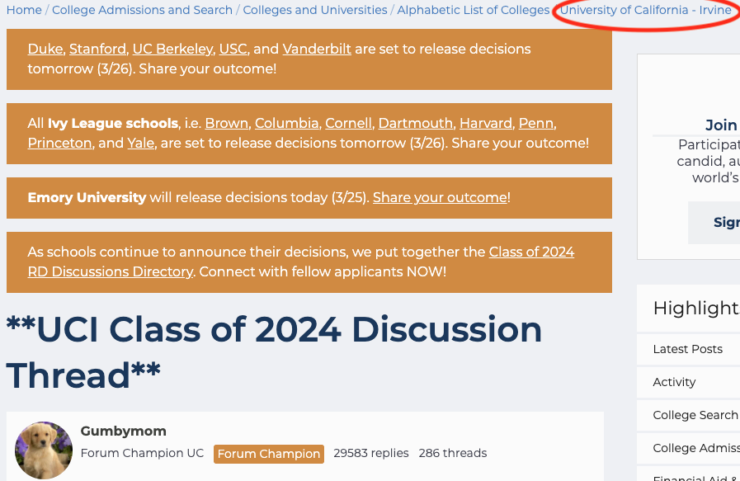 This is perhaps giving the new UI too much credit. The site is on the busy side and I didn't notice the navigation the first few times I used the forums. On the other hand, the four orange banners are a temporary measure to help people find the schools that are releasing decisions right now. Later on the navigation will be closer to the post unless you have the video ad loaded: 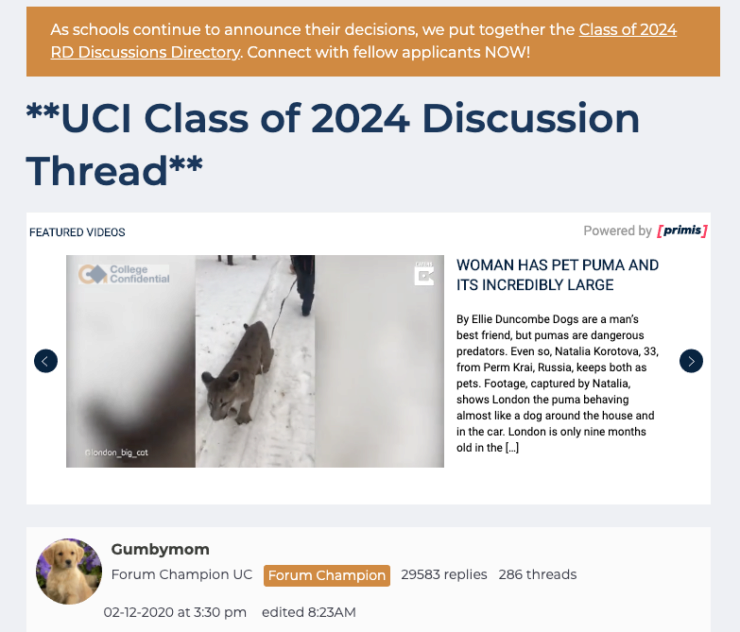 It's possible I'm missing something, but that little set of links is the only way to browse to more UCI discussions. Also, for some reason, the current navigation excludes the "C" level where, for some reason, UCI is located. I clicked on the "Alphabetic List of Colleges" expecting Irvine to be under I or, failing that, U. C for California is probably the right place, but the new UI no longer gives that hint.

What can we do about this?

As much as I'm tempted to revert to the previous theme, that's not an option we have. In addition to the technical problems, this would be a signal to our users that we're not working toward solving their underlying problems. As one of my all-time favorite articles says:

True innovation will rarely come from what users say directly.

Yes the new theme isn't working, but it can be made to work. We need to listen to what they are saying and dig deeper. Then we need to fix one problem after another until we have something that works.