Two years ago, Stack Overflow officially launched an initiative intended to make the site more welcoming. My sense is that it's largely failed in its goals, but now I think we have data to help us evaluate the initiative. The 2020 Stack Overflow survey included a question about whether or not respondents felt Stack Overflow was more or less welcome than in the previous years:

(Both screenshots are linked to their source.)

As the analysis this year pointed out, the responses have become more polarized. Jason Punyon suggests that people who felt more welcome were generally happy with new features and increased sense of kindness from the community. People who felt less welcome were more likely to mention, well, events that are apparently unmentionable now. As someone involved in these events, I'm super biased, of course. But I wonder if this question might be biased as well. It's really hard for people engaged with the meta-discourse to separate "welcoming" on Stack Overflow from all sorts of events that have happened in recent years. The words in the comments from people who feel less welcoming certainly indicate that. 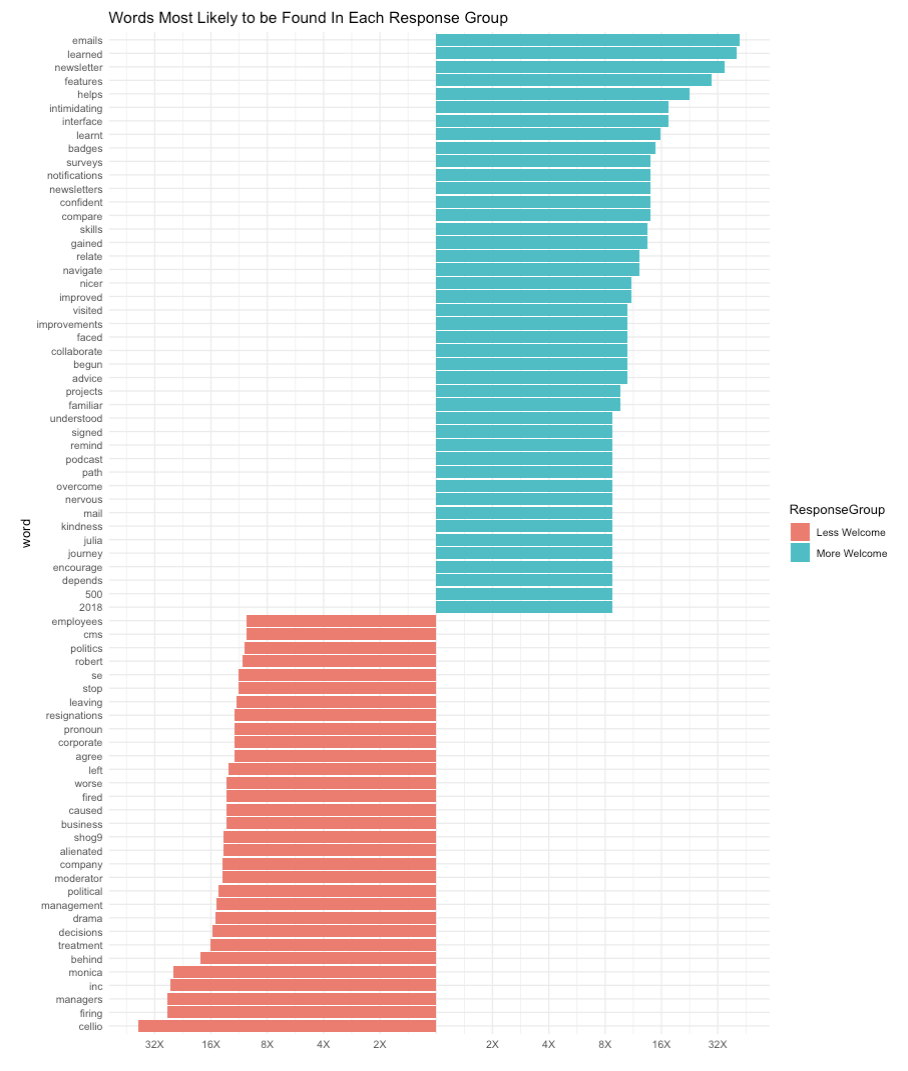 For the last few years, the survey has asked if respondents feel "part of the Stack Overflow community". This seems like a potentially less divisive question. Since a good deal of the welcoming effort concerned gender, its also useful to see how things are going over the years. This table shows percentage of people who say they feel at least somewhat part of the community.

The pattern across all genders is decreasing sense of belonging. Maybe changes in how the survey was advertised produced this result. Indeed the number of people who "have never participated in Q&A on Stack Overflow" rose from 17.3% in 2018 to 22.3% in 2020. In an effort to make the survey more representative of developers in general rather than just people (usually developers) who participate on the Stack Exchange network, the survey was actively promoted in other venues in the last few years. That's a good decision since the survey is touted as a survey of all developers and not just the ones active on Stack Overflow.

A 5% increase in non-participating respondents can't explain all of the decrease in sense of community:

Looking at the data in front of me, I am torn between two differing conclusions:

To put it another way, 2019 was incredibly difficult and painful to me and to a number of other people I know who have been associated with Stack Exchange. 2020 is shaping up to be the year many long-dormant improvements are finally implemented. But how big an impact are these changes to the typical Stack Overflow visitor? Am I too close to the changes to evaluate them?

It might help to step back and ask "Why worry about welcoming?" In general, welcoming is important for a group in order to attract more people who are currently outside the group. For Stack Overflow, welcoming almost always means addressing the obvious gender imbalance. The reason gender is the primary focus is, in part, due to growing awareness of obstacles places in front of women and gender minorities in the "technology" sector.1 But it's also due to a rather scathing Medium post, "Suffering on Stack Overflow: How We Might Heal", by April Wensel. She wrote in 2018 and pointed out our own survey showed 93% of the respondents were men.

So how has Stack Overflow done in that regard?

Even with concerted efforts to advertise the survey to women, the progress since 2017 has been slow-to-nonexistent. To summarize:

Why? Why has dedicating substantial resources in making the site more welcoming increased participation so little?

Let's talk about developers in India

A year into my CM job, I wrote a brace of queries showing question and answer scores by location. India and Indian cities consistently had lower average scores than Western cities with similar numbers of posts. I published my results on Meta and deleted the post a while later because of the difficulty I had interpreting my findings. Maybe developers in India write lower quality posts? Maybe there's discrimination against Indians? Maybe they post in times when posts are generally less likely to be seen by active voters?

These questions were uncomfortable because there was nothing I could do about the answers I might find. I still find them uncomfortable and I no longer am responsible in any way for answering. It's hard to escape the conclusion that we are seeing the results of US companies outsourcing work to low-wage countries. If an Indian developer can't get the training they need to do their job, but can ask on Stack Overflow, well, it's not hard to figure out what they will do.

When you look at where visits to the site originate, India comes in second only to the US. As hard as it can be for women on the site, they get nothing like the abuse Indian developers endure. For one thing, women can and do avoid letting people know their gender. Indians often have excellent English with a few distinct phrases carried over from their colonial history that act as a shibboleth.2 And yet their representation on the site hasn't much changed since 2015.

I think whether or not a site feels welcoming is just a tiny factor in whether people will participate. The overwhelming factor is whether people are getting something useful out of participating. For a programmer in India, asking on Stack Overflow might be the only way they can get past a coding barrier. For me, I might prefer to ask a colleague instead.3

Welcoming: necessary, but not sufficient

Here are some of the changes that Stack Overflow has implemented in order to make the site more welcoming:

By no means an exhaustive list, but you get the idea. I've marked initiatives that I played a meaningful role in with a dagger (†) so that it's clear my criticism includes my own actions.

These initiatives suffer from the pink motorcycle problem. Imagine you are Harley Davidson and you notice your customers are 81% male. That's a problem because it cuts your addressable market almost by half. When brainstorming ideas, someone suggests creating a Pink Label line of products. That way there's something for people who prefer imagery other than skulls or eagles. 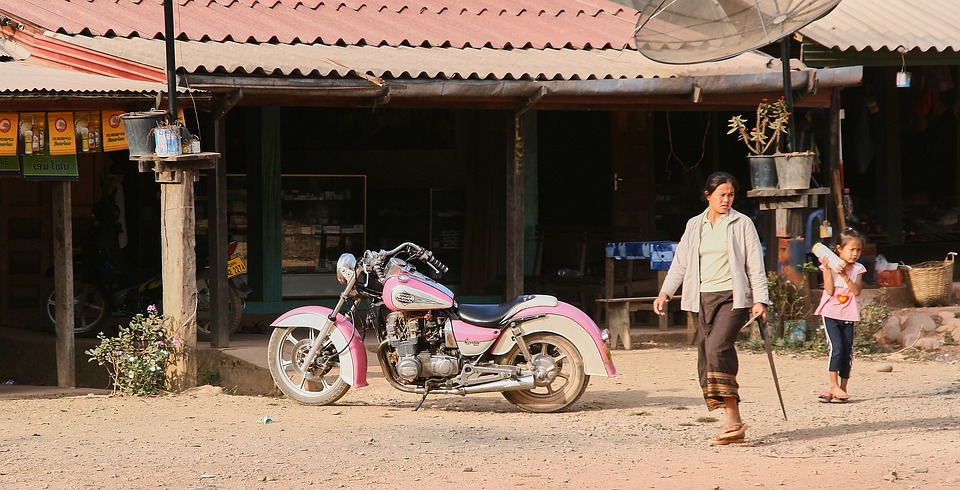 This isn't a bad idea! If you do some market research and discover that your women customers would like to have pink products, than that's a step you should absolutely take. But while you are doing market research, it might be a good idea to figure out if there are other reasons women don't buy your product.

Not everyone will have one of the two basic needs for posting on a Q&A site:

Unless you have an intrinsic motivation, nothing the company does will get you to participate. Stack Overflow has been hampered by its deeply held believe that everyone should be active on Stack Overflow. This is partially a noble ambition to be inclusive. It's also core to the thesis of its Talent/Jobs business. If you want to be LinkedIn for developers, you gotta aim to have every developer at least have an account on your site.4 Trouble is, the company has never demonstrated that using its service helps people find new work or companies fill positions.

The frustrating thing is Stack Overflow began work on a solution to this problem and promptly abandoned it. Yes, that mentoring project had scaling issues, but at least it was an attempt to build on the current strengths of the site (and community) rather than tinkering around the edges. Mentoring has the potential to bring in new users and provide a much needed service for developers. Instead, we get a thanks reaction.

« Lanterns: The Harvest Festival: A gracious game of tile laying and set collecting Reacting with 'thanks' »