Stack Overflow's CEO, Prashanth Chandrasekar, wrote a blog post called Accelerating Stack Overflow’s transformation. It's written for investors (more in a bit), but if you read between the lines I think there are some message for the Stack Exchange/Stack Overflow communities too.

Before I dive in, I should make clear that community relations at Stack Overflow have made a turn for the better. I've been critical of the company in the past because of the tremendous potential it has (and had). Lately I've been seeing signs the company has truly refocused on the community. For instance, there was recently a blog post about badges! I mean, it's been a topic in the past, but there's a new emphasis including calling out new Lifeboat badges in the podcast1 and calling out badges on Twitter.2 Badges used to have top billing on the site, but they were demoted to a link on the help page at some point, which showed a fundamental misunderstanding of the community.

We can never go back to the golden years of Stack Exchange and we probably don't want that anyway. Healthy communities change over time and while I miss the past, I'll always have the memories. What's important is whether or not the keepers of community will be able to do their work within the company. Let's see if we can find any clues starting with the post title.

This might seem odd until you understand the intended audience: investors. It's been over a decade since the first round of financing. At this point, private equity has invested more than $150 million. It's about time to find an exit strategy.

So the transformation Prashanth is talking about here is a revenue model transformation. When Stack Overflow exited beta and it was clear there was an audience for this the community's content, the founders added ads. From what I can tell, this has been a very predictable business. Briefly, the company sold Stack Exchange as a service. Then it pivoted to job listings. Now it's returning to a software service model. As Shog9 noted that announcement probably means the Stack Overflow Talent business will be shut down.

We just closed out the first quarter of 2021, and thanks to the hard work of Stackers across the board, we surpassed our most optimistic financial projections.

As an aside, "Stackers" is a fairly new term for Stack Overflow employees. I don't know that I heard it before Prashanth became CEO. He loves that way of designating employees. At the last meetup I attended, he started a talk by saying something like "Welcome fellow Stackers!" Only he said "Rackers" instead. That's the term Rackspace employees use for themselves and Prashanth was previously among their number.

Investors want to hear about growth. Not all investors, of course, but the sort of investors who are interested in companies like Stack Overflow want growth. Since it's privately held, the company doesn't need (or want) to divulge financial information such as revenue growth, so you kinda gotta take them at their word. Business is growing faster then anticipated.

We went into this year focused on two strategic priorities. Along with our mission and our core values, we let them guide us in all that we do. They are Product-led Transformation and Predictable and Reliable Financial Performance, both of which add value to our community and our customers by allowing us to continue to support and resource them better, and ultimately continue to make this a rewarding place to work.

In English: "we're focusing on improving our product and making money so that we can pay people to keep the lights on". That's... hopefully not new. But "product-led" is a new buzzword that emphasizes the freemium model. It's a model that goes back to shareware and free samples. It's also the same model as Slack, GitHub, Dropbox and a host of other services.

Will it work for Stack Overflow? Well, the blog post strongly implies that it's already working. But notice the better-than-expected Q1 mostly happened before opening the Teams product to 50 people teams for free. The proof will come weeks and months in the future when companies decide whether to spend on internal Q&A. My guess is there will be some lost revenue from small companies that no longer need to pay, but if a few larger companies test the product it could be worth it.

We have also seen growth in our annual recurring revenue (ARR) and increases in our net renewal rates (NRR), two key metrics for measuring the health of a product-led SaaS company like Stack Overflow.

These were goals for the Talent business too. Unfortunately customers didn't renew at a high rate. Perhaps the product didn't work as well as recruiters hoped. Maybe companies were able to hire the people they wanted without the service. Either way, Talent wasn't reliable. Teams has a customer lock-in advantage if and only if people ask and answer a lot of questions. So the improve the product piece is doubly important.

As we evaluated the success of Stack Overflow for Teams and our existing Advertising business, I worked with our board and senior leadership team to make a difficult decision. As I wrote recently, we have realigned our Talent business to simplify it overall and focus on areas where we have strong differentiation and tremendous potential for growth. This means focusing on employer branding and company awareness and moving away from job slots and direct hiring. It ties the product closer to what we offer through Stack Overflow Advertising and is part of what we’re calling our “Reach and Relevance” strategy, allowing companies to reach and engage meaningfully by sharing relevant information with millions of developers and technologists. As I’ve said, this change unlocks greater value for our users and helps our customers better achieve success.

I hate to quote so much, but this paragraph has a lot of important clues. "Make a difficult decision" usually means "fire some people". But who? At first I thought it was the Advertising folks. A more careful reading suggests this merely formalizes the elimination of the Talent business. Instead, Stack Overflow will position advertising as a way for companies to promote both their products and their perks for potential employees.

So this simplifies the products Stack Overflow sells by offering just advertisements to solve the problem of developers being aware of what companies sell and what they are trying to hire for. Brand recognition is one of the few things that made a positive impact when I was scouring job listings. Seems like recruiters might be willing to pay to increase awareness so that when people see their LinkedIn ads they will take a second look.

Later on the post calls this a "high growth" business. There few ways to grow advertising revenue:

I don't have access to Stack Overflow's traffic numbers, but anonymous feedback is a reasonable proxy: 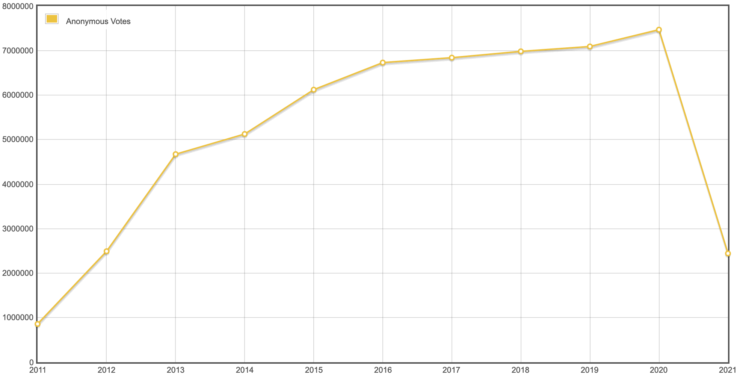 That shows ~5% growth in 2020. Voting by active members is flat. Either way, that's not what I'd call "high growth". There might be more ad units once the slots used for job listings are freed up, but presumably the revenue gained would be roughly balanced by what was lost selling the job listing. So the only way I can picture revenue growth from increasing the price charged.

I ran across an ad that seems to be selling the idea of working for a company rather than the company's products:

Clicking through takes me to https://www.apple.com/jobs/us/shared-values.html, which promotes Apple's values as a reason to work there.. Everybody knows Apple's products. Not every developer has a clear idea of whether Apple is a good place to work. Presumably this sort of promotion will help Apple recruit the people it wants to hire.

I've argued that by focusing more on Teams and Enterprise, Stack Overflow will have incentives to improve the public sites as well. For the sake of the community, I'd choose ads over Jobs/Talent because pageviews depend on a healthy community to generate content. If I understand the end result of this transformation, it will result in fewer distractions from improving the Stack Overflow platform.

What happens after a potential exit?

At this point there are only two viable exit strategies:

Stack Overflow's investors want to get back their investments plus a healthy return. Let's say each investor wants at least 20% return on their investment per year. Thanks to the power of compound interest, it's easy to calculate an expected value for each investment:

That means that either some other business or the stock market would need to value Stack Overflow somewhere in the region of half a billion dollars. For the market, that means either earnings that exceed the expected rate of return or growth in revenue. So if you are aiming for 11% and the company is paying an 11% dividend,3 you don't need much growth. If, however, the company is losing money now, you'll want to see a very large growth rate with the idea that you'll make up for it in volume. Since the blog post makes a big deal about revenue growth, it's likely earnings aren't (yet?) high enough for a successful IPO.

Companies that want to acquire Stack Overflow might not be quite so concerned about an exceptional return on their investment. Microsoft, in particular, bought GitHub less for it's earning potential and more for access to the developers who use it. Stack Overflow has a very similar profile in that it's a service nearly every programmer is familiar with and passively use. So the good news for existing investors is that companies like Microsoft value Stack Overflow for more than its earnings potential. The bad news is there aren't many buyers willing and able to drive up the price.

Odds are Stack Overflow and Microsoft have already talked price. The VCs want a bit more than Microsoft is willing pay. So the company needs to start making it's case for a public offering. The only story that will sell is growth—ideally "hyper growth". To reach that blessed state, Stack Overflow will push Teams as hard as it can get away with. Whether this continues after the "liquidity event" depends entirely on what the new owners value.

In my opinion, Microsoft would be an ideal owner for Stack Overflow and Stack Exchange communities. They've allowed GitHub to keep being GitHub and I don't see why they wouldn't embrace the entire network.4 But Microsoft already has a Q&A platform.5 So why would it want Stack Overflow? For the same reason it wanted GitHub even though it already had a similar product.

I don't see Microsoft ever competing with Stack Overflow's massive network effect advantage.6 Buying the company would give it unique access to millions of developers. And who knows? It might even connect Stack Overflow to LinkedIn somehow.