I was getting our side yard ready to have a Mother's Day celebration and as I cut back the climbing fig that covers our side wall, I discovered something amazing: 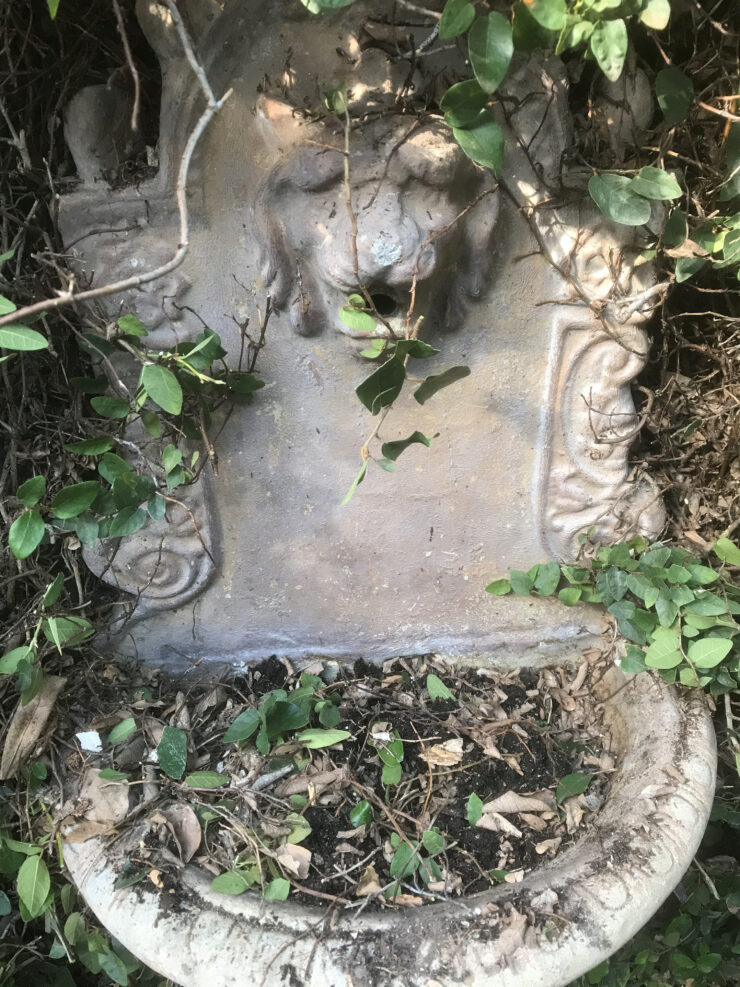 When I posted this picture on Facebook, my brother asked if it might not be a passage to Narnia. Of course that's ridiculous. It's obviously a fountain a previous owner installed when the wall was new. Later the fountain stopped working (perhaps because the hose was cut by accident) and they converted it into a planter. Finally the climbing fig covered the planter leaving a mysterious protrusion, which I investigated as I trimmed back the vines.

And yet, I too wondered if this might not be the face of Aslan, the lion who makes his way into all the Narnian stories. Indeed, I felt very much like the Pevensie children in the early chapters of Prince Caspian when they come to the realization the ruins they discovered are actually the castle Cair Paravel. I know full well that Narnia and Aslan are the product of Lewis' imagination. As much as I'd like my little yard to be a slice of Narnia, there will never be real centaurs or fauns or dryads here. But I also know that the stories Lewis wrote, the characters he described and the places he created transcend his books.

How to read The Chronicles of Narnia

A short digression for people who are new to the works of C. S. Lewis or who would like to introduce them to the next generation. If you buy a modern edition of the collection, you will likely see that The Lion, the Witch and the Wardrobe is numbered as the second in the series. Older editions put it first, as you might have expected from the adaptations for film and television.

There's not much mystery to the puzzle. Lewis wrote The Lion, the Witch and the Wardrobe as a stand-alone volume. Later he added to the Narnian stories proceeding roughly chronologically. Two books, however, broke the pattern. The minor break was The Horse and His Boy, which tells a story that occurs in the years described in the last chapter of the original book. It's a wonderful story, but it doesn't really impact the plot of the series.

The Magician's Nephew, however, does introduce important backstory since it details the origins of Narnia. If read first, it creates a very satisfying arc for the series. Read as an epic, it makes perfect sense to start there, just as it makes sense to begin reading the Bible at Genesis or The Lord of the Rings with The Hobbit. (Or even The Silmarillian!) And so the publisher changed the order of the boxed sets. After all, this is the logical order and it's only a trick of history they were ever read any other way.

Perhaps because I grew up reading (and hearing) Narnia in publication order, I don't think chronological is the best experience. At least not for being introduced to Narnia. After much consideration, I have come up with a reason that, I believe, justifies starting with The Lion, the Witch and the Wardrobe: it's the best way to get to know Aslan.

The lion of Narnia became a richer character as Lewis wrote the books. It isn't really a spoiler to say that he began as a Christ figure and a very direct one at that. Over the course of the books leading up the The Magician's Nephew (especially The Voyage of the Dawn Treader) he comes into his own. Yes, he still stands in for Jesus in these stories, but he's also something more, if that's not blasphemous to say. Getting to know him starting with the prequel changes his character development. Discovering Aslan along the same path that C. S. Lewis did works better than starting with the backstory.

From what I've read by atheists and other skeptics of religion, creation stories exist because of humanity's need to understand the world around us. Before the advent of technologies such as the telescope and the particle accelerator, people settled for obviously wrong, but somehow comforting fables. After the discovery of the Big Bang and DNA, we can put these misleading stories behind us.

Still, I find the thing that tempts me to atheism isn't improved understanding offered by science. Science is perfectly compatible with my faith, after all. No, the attractive thing is the narrative of an uncaring universe that produced via simple Darwinian mechanisms, a people who can understand the inevitability of the second law of thermodynamics. And rather than despair, that people found beauty in the world and in each other.

You see, the thing that connects people is the stories they tell. Sharing my discovery of "Aslan" in my garden created connection within the community of Narnia. We all had the same thought because we know the story of Narnia includes seemingly ordinary objects in our world being portals to another realm. If you aren't part of that community, it must seem a little strange. We are eager to invite you in, but there is only one entrance. You must share in the stories that C. S. Lewis told.1 Once you do, you belong.

And this is true of any community. Stack Overflow tells a story of expert programmers providing answers so that everyone can find them (if they know how to search). Stack Exchange tells a story of sharing all types of knowledge using the same system. I'm still learning the story of College Confidential, but it involves helping students chart their futures. Until I learn the story and can tell it myself, I am an outsider to the community.

Lately, I've been pointing out leadership's failure to communicate a plan and that still is a criticism I have. My guess is that executives and investors at Stack Overflow don't agree with my assessment. They probably look at communication such as the quarterly CEO update, the podcast and the Community Roadmap as more-than-sufficient communication. I certainly appreciate the effort and even a good deal of the content. But it isn't exactly compatible with the stories the community tells. They are, rather, investor stories.

Stack Overflow, in particular, became valuable because it was a searchable catalog of all sorts of arcane knowledge about programming. The story the company tells about itself manages to miss that point altogether:

Helping write the script of the future by serving developers and all technologists.

It's not a bad slogan in the context of a business that sells job listings, ads for programming tools and private knowledge collection systems. These products do serve developers. But the killer feature of Stack Overflow has always been that you can Google an obscure error, find one of the few other people who have encountered it and see how they solved the problem. The site's value is more humble than a marketing message can convey.

Or look at the site's HTML title tag:

In addition to the particularly senseless Oxford comma, this tagline misses the most common thing developers do on the site: solve their problem and move on. While it's certainly possible for developers to learn on Stack Overflow, regular users know the same questions are asked time and again. Which isn't to say this is a bad slogan; it's just one that doesn't connect with the stories the community believes about itself.

I often felt people at Stack Overflow who hadn't used the site were somehow ashamed of it. They looked at regular users and saw unearned privilege. I'm not sure they understood that becoming a developer is more than accumulating knowledge about languages and frameworks. Instead of investing in features such as Documentation or mentoring that would have given space for experts to assist new users, the company insisted the problem was implicit bias.2 The truth is programming languages are pedantic jerks and you gotta have a little bit of that in you to succeed in working with them.

There has never been a force powerful enough to eradicate a story as long as there are people willing to tell it. That cuts both ways. The company can't compel users to accept their marketing messages and the community can't change what the company has decided it needs to do to run its business. But both sides can start telling stories to bridge those gaps.3 Just as stories can be told to exclude (like an inside joke) they can also be used to include. It just requires people to be open to listening to others to incorporate their point of view.