So we need ways to simplify the relationships within large groups. The military uses rank and specialization. A soldier doesn't need to know anything about the personality of the officer in charge to know the proper way to relate to them.3 Other organizations have other simplification systems that help people get through their days without burning excess emotional energy figuring out how other people will respond.

Online communities might seem egalitarian, but until you think about how moderation works. Whether formally organized or not, online communities naturally give preference to people who have been around longest and contributed the most. Just showing up and participating counts for a lot. From time to time two really active users get on each other's nerves for whatever reason. This is tricky situation for moderators since this is the sort of thing that can split a community and it's uncomfortable to be required to pick sides between two established members.

Enter the ignore feature. In an intimate setting ignoring someone else is typically not a good idea. On a site with hundreds of active users, it's sometimes necessary. You might be familiar with mute and block on Twitter and Facebook. An ignore function on forums works something like that. It's a sort of Ulysses pact allows you to spend time in the same space as someone who irks you without the danger of getting into fights. Or that's the theory at least.

How the ignore feature gets designed matters quite a bit, as it turns out. The community I manage is currently on Vanilla Forums and I've seen grown adults who have proven to be productive members of the community act like Trixie here4:

Now I'd heard rumblings that ignoring people on Vanilla wasn't very effective. For instance, a person you ignore can still like your posts.5 So I thought I'd try the feature out myself. I created a new account and pretended that it was from rabid USC fan. (I went to UCLA and there's a cross-city animosity between the two schools.) I decided I didn't want to see anything from the user who wrote this post:

10s4life is actually a UCLA Forum Champion and a well-respected member of the community. I'm doing this for science using a test account. This account is a brand new member who has done nothing on the site so I wasn't sure it would even be possible for them to ignore another user. But it turns out they can if they know where to look: 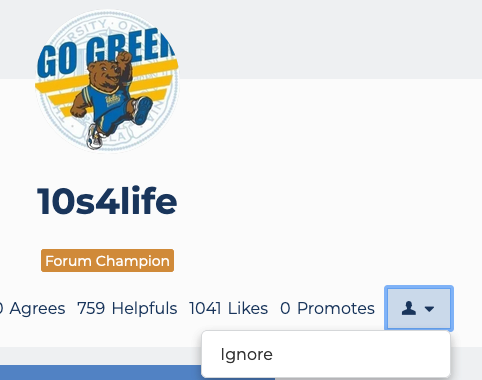 It's odd that new users can ignore almost6 anyone, including moderators. I suspect new users won't often stumble on the feature, which is kinda hidden. Since I have found it, let's discover what the feature does:

That popup is profoundly unhelpful. For one thing, it's not clear why it exists. The implication is that ignoring someone is a momentous decision that might not be possible to reverse. It's incredibly easy to unignore someone. Just go to their profile and find the "unignore" switch exactly where the "ignore" switch was before. So it's unclear why there's another button to press.

For another, this is the developer's chance to explain the way the ignore feature works and they whiffed. Perhaps the consequences of ignoring someone aren't explained because it hardly does anything at all. Here's the post I showed earlier from a person I've ignored:

I cheated. it's the same screenshot from before since there's no change to show. Threads started by people you ignore aren't in any way hidden or deemphasized. They still show up as normal on the category page too:

At this point, I should mention that most of what I know about the ignore feature I learned from experimentation and reading the code. The documentation consists of five sentences. Only by reading the code did I discover the route to a list of people I've ignored. It's minimally documented. I could very well be missing something, but it doesn't seem like reading the code should be necessary.

Ok, so what does ignoring someone actually do? Well, it does hide replies:

So you can see there was a reply and that it was someone you've ignored, but you can't read the reply unless you click on the reply. That's right: ignoring a user just makes their replies more mysterious. It's a fun little game where you see a thread with a reply from someone you frequently argue with and you get to guess what horrible thing they might say. Whether or not you reveal the text of the reply, it doesn't feel like ignoring that person is a good way to avoid them.

Let's look at Discourse by comparison. To start, it has excellent documentation. My main quibble is that there's been work done on the feature that isn't reflected in the screenshots. I grabbed my own to show how replies from ignored users look on Discourse:

It's a hidden reply from . . . someone for some reason. Yes, you can click it to unhide the reply, but why would you? It's a very subtle clue that part of the discussion is missing in the off-chance something has been confusing. A nice touch is that there are other ways to hide replies (such as filtering just the replies from the topic's original poster) so you don't automatically assume it's a post from someone you ignored.

This is a system that has nuance. Want to ignore someone for a few days because of their comments on recent events? Want to mute a user so that you stop getting notifications from them (but can still read their posts)? Can't remember who all you've ignored? Need to limit personal messages to a select group of people? These are all options Discourse allows.

What's more, administrators have access to a report showing who has been ignored or muted most. It's like an early warning system for problems. Ultimately, people ignoring each other harms the community.