I've been playing kinda a lot of a game called Star Realms. It has an app and I've played over 600 games against other humans online plus several hundred more against the AI. My lifetime record against people is 44%, which means I lose 3 times for every 2 times I win: 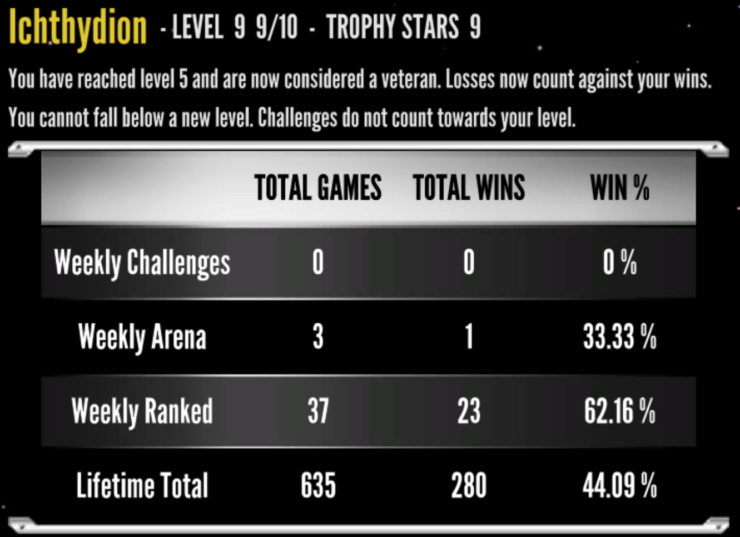 But this week, my record was substantially better: 62%. Why? It's possible I'm extraordinarily lucky this week, but there's a big thing I changed. There are two different ways to play against other players:

The first is like playing chess by email. You have plenty of time to consider your moves (and so does your opponent). Most of the time I take far fewer than 48 hour and sometimes I actually see the other player make their move immediately after I end my turn. This is one of my favorite ways to play because there's no particular pressure to play my turn. I typically have a half dozen games going at a time this way.

But starting this week, I tried playing Realtime games, which limit players to a minute or so per turn. It works a bit like a chess clock except you get a few seconds added when you make each move in your turn. The game doesn't split out my win/loss record by game type, but it quickly became obvious I win more games in the faster format.

It could be I'm better at the live game. It requires a level of concentration and quick thinking that the play-by-mail version doesn't demand. My attention is also divided between several games and all the other things going on in my life. It's easier to get more games in so, in theory, I have a chance to learn from mistakes more rapidly.

But there's another factor that probably matters more: the realtime mode seems to have more players. I can't find reliable statistics for how many people play each mode, but my impression is that PBM has more rematches with players I've recently played. More to the point, my recent matches have been with players ranging from level 1 to 27. Meanwhile, my realtime games have been with players at, just above or just below my level.

As a result, my 48-hour games tend to be blow outs since either I'm far advanced compared to the other player or the other way around. My live games have been much more competitive. Surprisingly I'm also winning more games against people at my level. I think the reason is that I'm a better player than the level system indicates. Partially it helps I've played games against far better players and (hopefully) learned a few things.

I suspect the level system combined with the nature of the game itself means playing against varied competition dramatically slows leveling. Top players win 65% of their games, so there's considerable luck in Star Realms. Sometimes the cards turn against you and it's hard to win. Meanwhile the level system counts loses against wins. To go from level 9 to level 10, you need to win 10 more games than you lose. While I can beat up on low level players, losing against better players halts my progress.

Whatever the cause, I enjoy games against people with roughly my level of skill. Of course I also enjoyed playing against random competition too as indicated by hundreds of 48-hour games. I just resigned myself to never gaining levels (or getting really lucky). Better matchmaking just makes the game I already enjoy more fun. New levels feel attainable now.

This reminds me of an attempt a few years ago to do matchmaking on Stack Overflow. It didn't end up working as expected, but the idea is solid. When someone answers one question, they may very well be in the answering mood. So giving them suggestions about what to answer next should be productive. Discourse (my current favorite example of community software) has a Suggested Topics feature that doesn't try to get too fancy. For discussions, suggesting topics that have new replies since the last time you visited works great.

Perhaps more important than limiting who you interact with, group software needs to open connections with others who you don't yet interact with. Sadly Facebook seems more interested in connecting with advertisers and Twitter tends to encourage interactions that stir up anger. Stack Overflow connects people who are bored (or worse) of beginner questions with . . . beginner questions. There must be a better way.

« Ignoring others for community peace My answer about using preferred pronouns »