In the late eighties, there weren't as many games to play on a computer as there are now. Unlike Nintendo, Atari and Sega, PC platformers were rare and mostly bad. I played a bunch of text adventures (and later point-and-click adventures), strange 2D battle and flying games, and, of course, joystick-controlled simulators. Later, when Descent and other early shooters allowed movement in 3-dimensional space, I adapted the flight controls to aim with a mouse. The first time someone handed me a dual-stick controller, I kept flipping from floor to ceiling until I discovered the option to invert the controls. No matter how long I try the default control scheme, I can't get past decades of muscle memory.

Or at least I couldn't until suddenly, and for no discernible reason, my brain flipped. Now if that were all, this story would not be elevated beyond a simple curiosity. Fortunately, I have an idea of how it all happened and I think it's a model of how minds are changed generally.

Most of the shooters I've played are first person representations. The camera is stuck more or less in the same position your head would be if you were in the game world. In truth, a better term would be a "behind the gun" perspective, since most of what you see of your character model is your own gun: 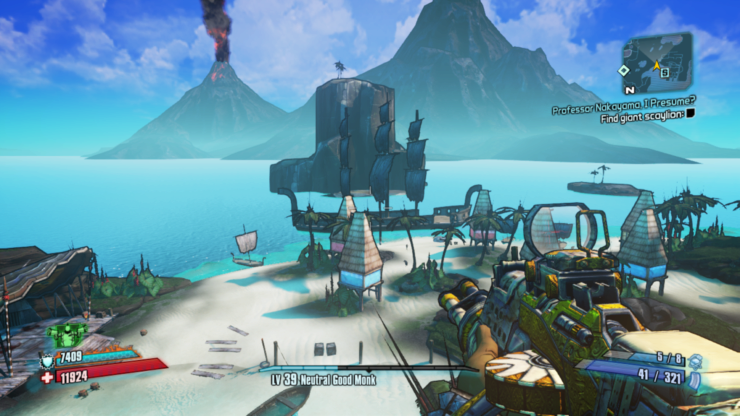 Looking at the world this way, aiming is a simple matter of pushing the barrel of the gun up and down. It's not the only mental model, but it's how I thought about it. Conveniently, the muscle memory matched my flight simulator experience: push forward to pitch down and pull back to pitch up. Instead of the nose of a fighter jet, I was steering the tip of a rifle. Or even more naturally, the cross-hairs (which are hard to see in this image) move in the same way that gun sights move in a WWII flight sim.1

In education theory terms, I assimilated the new experience of aiming in first person to my existing model of aiming with a joystick. Obviously, the developers abetted this behavior by providing the option to invert the Y-axis.2 And they have good reason for that: it's much easier for a programmer to add a setting than it is for a player to adjust their mental model. Even when the inverted-Y-axis population is small, not offering the option costs potential revenue because it's not fun to fight with a game needlessly.

Almost all learning we do after we've matured is simply assimilating new data. This is true on an individual level, but also for entire societies. Most divisions you see in people around you are the result of divergent models of reality. Liberals and conservatives, religious people and skeptics, just see the world differently. In extreme cases, people develop epistemic closure giving them a framework to reject foreign beliefs.

Just as my inverted Y-axis model was formed by the games I played at an impressionable age, much of our models of the world get established when our minds are new.3 This is why so many people acquire the religious beliefs of their parents; those ideas become deeply implanted when minds are young. The window for forming and altering core beliefs starts to close in early adulthood.

You might be thinking this is bad news, but consider how important preserving core beliefs are! We spend decades acquiring them, so we should be slow to abandon our central ideas. Thomas Kuhn described the difficulties of moving beyond Newtonian physics thusly:

To make the transition to Einstein’s universe, the whole conceptual web whose strands are space, time, matter, force, and so on, had to be shifted and laid down again on nature whole.—The Structure of Scientific Revolutions (p 149)

In fact we still teach Newtonian physics to most students because relativity only matters in very specific situations humans rarely experience. So when students take an advanced physics course, they need to rebuild their "conceptual web" to account for oddities like the Twin Paradox and gravitational lensing. Even then, it's generally fine to revert to the previous paradigm once the final is over.

So it's not always clear that changing your mind is necessary. We tend to identify times when other people need to change their minds. Paradoxically, that often means there's something wrong with our own way of thinking. A stark example is people who value diversity insisting in the strongest terms that people they disagree with need to change their opinions. I'm not saying their core beliefs are wrong. (I often find myself agreeing, in fact). Rather there is an inherent contradiction that ought to be examined with honesty.

At any rate, I started with a story about how I changed the way I think about video game controls and it's about time I got to the punchline. It happened while playing Assassin's Creed IV: Black Flag. Ever since Sid Meier's Pirates!4 I've had a soft spot for pirate games. So I really wanted to play it. The trouble was, I didn't know how to invert the mouse Y-axis.5 So I ended up playing the entire tutorial and several missions using uncomfortable (for me) controls. 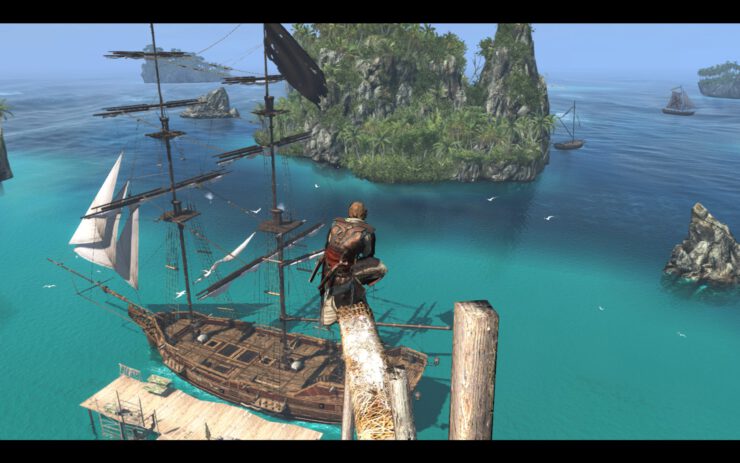 Now the Assassin's Creed games differ from many 3D games on the PC in that they show the player character's body. This is usually called "third person" because the player observes their avatar from behind. Perhaps it made the transition to inverted controls slightly easier since the mental model is less steering plane (or a gun) and more controlling an independent camera.

But the reason I was able to adjust to a foreign control scheme was simply that I lived with it long enough to adjust. I could have given up on the game. I could have discovered the hidden option to invert my mouse. But I didn't. I stuck with the uncomfortable feeling long enough that I got used to it. And now I don't go out of my way to invert controls. I don't have to.

I'm convinced that the reason we don't change our minds is that few of us are willing to be uncomfortable for long. Not long ago, someone challenged one of my assumptions about the world. My first instinct was to disagree—violently. But it was late in the evening and I slept on it. The next morning I decided to just ignore this person's comment. But the longer time went on, the more I realized I might be the one who was wrong. It distracted me from ordinary activities and I wished it would just go away. Finally, I saw the other person's point of view. I still don't agree—not fully. Letting myself sit in an awkward mental state gave me the insight to be open to change.

We talk about "irreconcilable differences" and how other people are too evil/ignorant/foolish to be trusted. Those are symptoms of our unwillingness to care about others enough to inhabit their mind space. Ultimately, if you value being open-minded, you either will be frequently uncomfortable listening to others or you are a hypocrite.