Originally published on Board Game Geek.

My kids have been getting into Carcassonne in a big way and they noticed my one and only expansion on the shelf. (I've played other expansions in the computer version, but I don't think any expansion is necessary to the original game.) Since Carcassonne expansions can be added piecemeal, we've started playing with just one at a time to see how it works.

We played an entire game with a grand total of one bridge played: 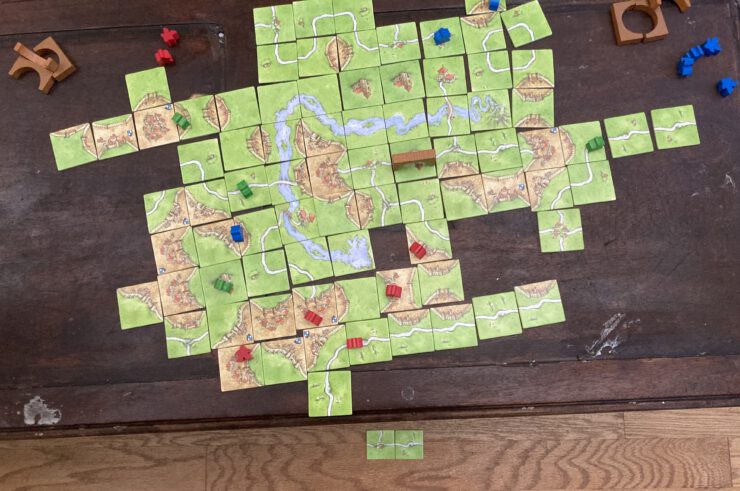 The eagle-eyed in the audience will notice a mistake with a road tile that dead-ends on an open field. This was the last tile played and it helped one of my children get a slightly better score without changing the outcome so I let it slide. (We also ignore the restrictions on the river tiles designed to avoid getting stuck. It's fun to build big bends and we feel free to change the flow of the river later if it causes problems.)

This mistake helps illustrate the value and limitations of bridges. If you have a tile that you really want to place somewhere but a road edge is blocking you, a bridge might solve your problem. They can either be built on the tile just placed or on an adjacent tile. The key is that both ends of the bridge need a footing in a field edge. In our case, the bridge would not help since the other end of the bridge would have been on a city edge.

We didn't use many bridges because we didn't often feel the need to place a tile where they would be needed. Intuitively bridges feel like an expansion to the road mechanics. It's true a bridge can let you claim a share in someone else's road, but their real value comes with farmers. Unlike roads, bridges don't divide fields. A core strategy of Carcassonne is finding ways to claim other people's territory by adding just the right tile. Bridges allow that to happen in spots where it would be impossible in the base game.

The one bridge I placed shows what I mean. When there are two tiles with road ends facing each other, that normally signals the edge of field since no tile can go in that spot without dividing the field. But I was able to place a cloister surrounded by fields and open up both sides to a farmer. (I didn't actually place any farmers in this game because my kids didn't want to play with farmers this time around. I, uh, often do quite well with farmers.)

I like bridges because they open up more strategies to claim longer roads and bigger fields. They also make "boring" road tiles a bit more interesting to play. I also enjoy fiddling with the bridges as they sit in my supply.

We placed a bunch of castles when we played with them. We also used farmers who took advantage of the castle bonuses. 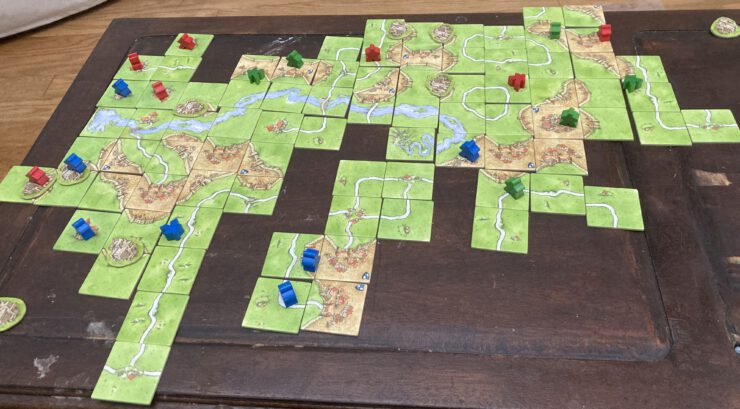 Castles work as an investment mechanism. You can take the 4 points when you build a football (American) town or place a castle that will potentially reward you a bigger point total. On the left side of the image, there are three castles in a group. My son scored one of the castles by completing the huge 26-point city. He immediately gained 52 points with a single play. The other two castles were built later and the game ended without them scoring. So that's the risk and reward potential.

When a castle goes down, it's often in other players' best interest to complete some other feature (like a short road) so the castle doesn't get a huge payout. And since castles are even more valuable than small cities when farmers are scored, they also focus attention on surrounding fields. (This time my kids wanted to play with farmers so I experienced this directly.) As a result, castles focus attention on one portion of the board in a way that other features (in the base game) do not. Castles demand immediate attention.

I've always liked two-tile cities as a way to score a quick 4 points without tying up a meeple. That's still possible, but castles strongly encourage a longer-term investment. For me, this is an ideal expansion that adds more decision points without increasing the complexity or altering the game too much.

I don't have an image to show here because we haven't actually played this portion of the expansion. My excuse is the auction rules are fairly complicated for younger children. We probably should try the bazaar variant that just has players select from turned up tiles rather than bidding. It has the odd effect of sticking the player who turned up the bazaar with the least desired tile rather than giving them the final bid.

I'm a little hesitant to pass judgment on this portion of the expansion without playing it because I found the other two parts more interesting on the table than on paper. That said, it seems like bidding for tiles very much depends on whether a particularly valuable tile turns up. It could very well be worth a lot of points to get the one tile needed to complete a large city, which would make for a taut auction. (This is especially true if someone stands to claim those points with a castle!)

When there aren't standout tiles, auctions seem like a disruptive mini-game. Certainly the existence of several bazaar variants suggests players are not satisfied with the official rules.

One thing to note is that if nobody cares strongly about getting one tile, everyone can bid 0 points. That defaults to picking tiles in turn as in the official variant. So it could simplify the process to decide after turning up the tiles whether anyone cares enough to go through the auction process. Again, I haven't played with bazaars myself.

None of the bits of this expansion seem vital. Castles come the closest since they take what is usually an obvious play and make the decision harder. The bazaar tiles could be added to any game without needing to include the auction mechanic. They just make the resulting map a little more varied. When we played without bridges we did notice more times when they would be useful. I suppose we need more practice using them. Next time I'd like to try the simple bazaar variant, but auctions seem like they would break the flow of the game too much.

On the whole, I'm glad we finally tried this expansion, but the base game will probably continue to get played most often at our house.

« Hosting Discourse for free! Finding a community manager job in 2021 »