Crypto Cards is multiplayer game about cryptocurrency that uses nothing but an ordinary deck of cards.

This is a draft of the rules. This game has not been playtested! If you'd like to help me out with that and have Tabletop Simulator, I'd love to teach you the game. If you try it on your own, please send me a report via email or the comment section.

The winner of Crypto Cards is the player who leaves the least value on the table. In game terms, that means having the smallest portfolio by selling the most crypto.

Remove the Jokers from an ordinary deck of cards, shuffle, and deal out 5 cards to each player. Shuffle two Jokers back into the deck and place it face down within reach of the players.

The four suits represent the 4 cryptos1 in this game: 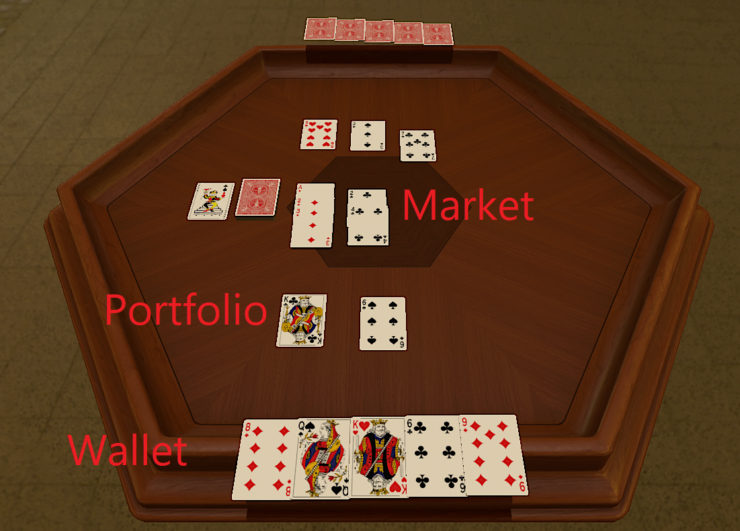 The player who has most recently bought, sold or mined a cryptocurrency or NFT goes first. Play continues clockwise around the table.

On their turn, each player must mine and transfer one crypto. They may also be able to sell a crypto into the marketplace.

There are three ways to sell crypto:

Important: Even though this is called "selling", there is no compensation for selling a card from the portfolio. The goal is to have as few cards as possible in your portfolio at the end of the game.

At the start of each turn, the active player must mine by taking the top card from the deck into their hand.

If the card is a Joker, the player must reveal it, place it next to the deck, and draw another card. The game ends immediately when the second Joker turns up.

If you have more than 5 cards in your hand, transfer a card to your portfolio so that you have just 5.

All cards in each portfolio must be visable to all players at all times. Do not hide cards or stack them in a way that others can't tell what you have.

You may transfer a face card, but it does not allow you to sell a card during the Transfer step. Since it goes in your portfolio and doesn't provide any value, transferring a face card is generally to be avoided.

Reminder: Face cards on the table count, but cards in the hand do not count.

This game is heavily influenced by Lost Cities. It's intended to be a hand-management game with a shared resource. In this case, the resource isn't a pile the other player can draw from, but rather the market where cards can be discarded to. I have a variant in mind that requires the score to be calculated, but I wanted to start with a simpler game first.

My children happened to get Monopoly Deal on Easter. It's a card game version of Monopoly and it's not half bad. A key component is that you can't pay for things with cards in your hand, but you have to play cards to the table where other players can see them. I had toyed with that idea earlier and playing Monopoly Deal cemented the mechanic as interesting. It means everyone has a chance to react before you can move a card you just played.

Like Monopoly, Crypto Cards isn't so much a simulation as a game mildly critical of its subject matter. Face cards represent celebrity and corporate endorsements. Jokers represent market collapse. This isn't a game about investment so much as taking advantage of irrational exuberance while you can.

« The mystery of the missing Oracle Cloud IP Tablut: More like Viking Go than Viking Chess »