Reviewing a game that was played for over a thousand years and doesn't have a single defined rule set is tricky. Boards have been been found carved into wood (often with Nine Men's Morris on the reverse side) that have anywhere from 7x7 to 18x18 squares. The game described by Carl Linnaeus uses a 9x9 board with 16 attackers and 8 defenders of the king. However, if he'd discovered the game in a different location, it's entirely possible he'd have recorded a different set of rules. Tablut is just one entry in a family of games where defenders must escort the king off the board in order to win and attackers work to prevent this from happening.

A few years ago my wife gave me a leather board that can be cinched up into a small bag for carrying around. I substituted some sea glass for the defenders that came with the board. No idea if any Viking owned a set like mine, but it's fun to imagine warriors reliving their exploits on such equipment. 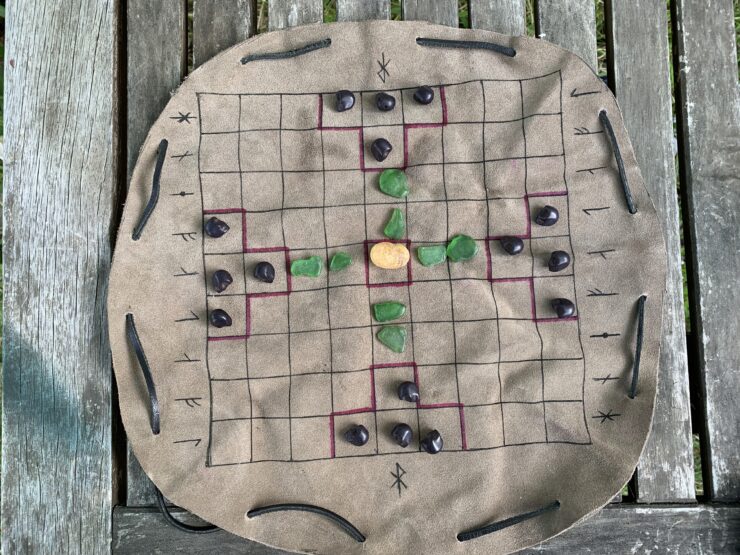 For reference, I've mostly played the rules from the Board Game Arena implementation. That means:

That there are variants stems, in part, from the oral nature of the game. Until Linnaeus wrote them down in his methodical way, there was no common set of rules except what people agreed upon. It's easy to imagine an outsider coming to the table and needing a quick primer on the local customs for the game. And, of course, it would be natural for people to try the rules the newcomer brought as well. Perhaps some were added just to break up standard openings and other habits.

More importantly, however, the variants tend to favor one or the other side. It gives the defenders an advantage if the king can escape anywhere on the edge of the board. When the king can capture, it means the attackers must be more careful in their approach. The various rules about whether or not the throne (or the attackers' camps) can be re-entered or used as path tip the balance toward one side or the other. One gets the sense that variants served to restore balance between asymmetric forces. Or, perhaps, they acted as a handicap to make contests between players of differing skills less one-sided.

Games go fairly quick. (One online service reports an average of 36 moves, which seems about right in my experience.) As with all abstract games, the time per move depends on the time each player dedicates to thinking about their options. As with well-designed abstract games, the decisions don't often come easy.

For instance, the attackers have such a large advantage in material it seems wise to make even trades. But since defender pieces block the king just as efficiently as attacker pieces, there's a cost to clearing the board. More importantly, it's easy to get distracted by capturing on one side of the board as the king slips away on the other. Meanwhile, the defender must move the king to escape, but it very much pays to wait for the right moment. Leaving the throne too early is a good way to lose early.

This might be a good time to reveal I'm terrible at Tablut. This is odd because I'm an above average chess player. Only maybe it isn't. As Moshe Callen writes:

Modern players are pre-conditioned by games like chess and draughts to attack in such a manner so as to capture or threaten to capture an opponent's pieces. This approach can work, albeit incidentally in most cases, for defenders, but it is directly counter-productive for the attackers. This is why modern players perceive advantage as lying with the defenders. Yet, neither side should concentrate on capturing pieces. For the attackers, like in chess the game is all about taking the king; other pieces are by the way. For the defenders, the game is about getting the king into the open so that he can be moved to a corner.

He further compares one Tafl variant, Brandubh, to Go for the attackers since the goal is enclosure. Instead of the strict symmetry of Go and Chess (with the sole exception of the starting player), Tablut gives opponents differing resources to accomplish different goals. It's one instance of a larger system of games that bears some resemblance to other grid-based games (Chess and Go in particular), but must be addressed on its own terms.

Also published on Board Game Geek.