Trip to Tours is a solo scenario for Orléans that comes in the 5th Player Box. So that expansion opens up the player count at the top and the bottom of the range. I haven't had a chance to try with five players, but I did manage to organize a few solitaire sessions with myself.

My first complaint is that the English version should have been called "The Tour of Tours". The concept is that your Merchant must deliver 3 citizens and 3 of each type of good to the city of Tours in 14 turns. Instead of Hour Glass Tiles, events are fixed on a track, so you always know what's coming. The main puzzle is planning a route to pickup the necessary goods as you travel from Nevers to Tours. 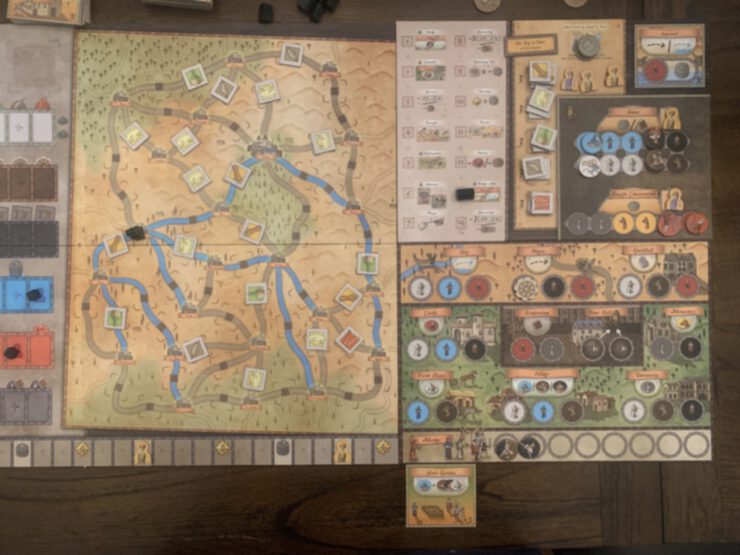 The scenario consists of a page of rules and a board containing:

Setup is the same as a four player game with a few adjustments. The Preparation section of the rules isn't entirely clear how to put out the goods, but the Gameplay section indicates there may be two goods along a path. I didn't spot that until the end of my first game in which I'd used the two-player setup for goods. Since the scenario is about efficiently collecting goods, I didn't do very well with that game. My merchant ended a few cities away from Tours in the final turn.

As an aside, the final turn's event requires turning in three food goods or 5 coins. That's pretty harsh, but it's not entirely clear that anyone would lose the game this way. If your merchant reaches Tours with 3 of each good and 3 citizens, it seems you'd win before paying the harvesting cost. A simple change would be to say victory can only be achieved at the end of a turn. In addition, Bankruptcy (AKA, Torture) would result in a lost game.

In my next game, using all the good spaces, I did much better. Having access to all the resources certainly helped, but I think my play improved as well. I delivered everything to Tours by turn 12 of 14. For my third play, I reset the map to the 3-player setup. It was a bit harder, as expected. I finished the scenario on turn 13. My guess is that I could win with a two-player setup if I tried again.

That said, I think I'm nearly done with this scenario. It's officially a Difficulty Level I, which is intended for beginners. If you haven't played Orléans, playing this solo version will give you a feel for the flow of the game. It also demonstrates the necessity to plan ahead, which can seem surprising given the inherent randomness in pulling tokens form a bag.

Removing goods from the set up does increase the difficulty. Still, there are some obvious paths to follow. Investing in scholars, for instance, seems like a waste since the Development Track doesn't help deliver goods. The Stagecoach, which players start with, should be used often. That means having knights and coin. Collecting boatmen provides a good source of coin and can also help you use the waterways. Despite random goods setup, there isn't enough variety to play this scenario after you've learned its tricks.

That's fine, of course. Learning to play Orléans by trying a stripped down solo mode seems a worthwhile addition. The bulk of the value of the 5th Player expansion comes from adding another spot in the base game. It makes me curious about the solo scenarios in the Invasion expansion.

If I play it one more time, I think I'll look at doing a score chase. Instead of ending the game early, play to the final turn which must end in Tours. If you have 3 citizens and at least 3 of each good, add up the values of all the goods and coins you are holding. Don't forget to pay for the final harvesting event and don't score Citizen Tiles. The minimum winning score is 45.