Inside the front cover of the Trekking the National Parks' box is the family story of why the game was made. You can read a version of the story on the publisher's blog. The designer was inspired by his parents' life goal to visit all the national parks. Then I read the rules and thought "Isn't this just a remix of Ticket to Ride?" 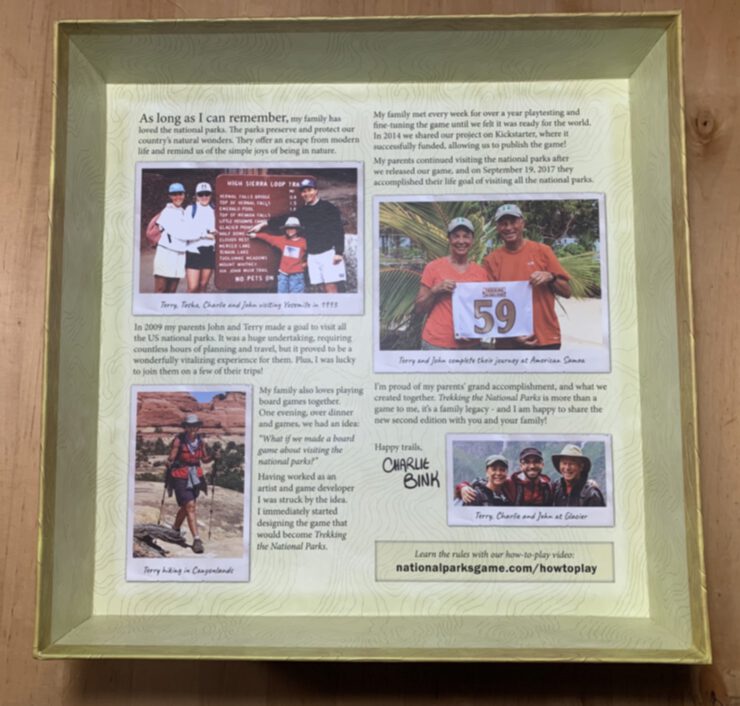 Both games require collecting sets of cards in order to collect points by traveling on a map of the US. In Trekking, the cards have an outdoors theme. Claiming a park requires visiting its location and spending the set of cards required by that park. For instance, Acadia NP requires two trees and Lassen Volcanic NP requires a canoe, a mountain and a boot. So like Ticket, a fair number of turns involve fishing for the necessary cards.

Now I'm not a fan of Ticket to Ride. I respect it as a quality game, but I really dislike that so many turns are drawing two card off the top of the deck. So that's what I was dreading when I played Trekking for the first time. I figured it would be many turns of collecting cards so that I could claim a park for points.

But that's not what my twins did. There's another way to earn points in Trekking: collecting stones. During setup, each park is covered by a colored stone. The first person to end movement on a park can claim the stone. Each stone is worth a point and the person who has the most or the second most stones of each color earns a bonus. Instead of claiming parks, you can decide to use your cards to travel and collect stones.

The other twist is Major Parks, which everyone can claim. Each Major Park gives players a unique special power. For instance, the Grand Canyon gives people who have claimed it an optional +1 to their movement. It's a nice bonus best acquired early. Only three of the six Major Parks are used in each game, so there's built-in variety.

As I think about the rules, Trekking makes some subtle but important decisions that draw it away from TTR. Parks cards replace destination cards, but instead of each player having secret objectives, three Major and three normal Parks are turned up for all to see. Everyone is chasing those six objectives (or collecting stones). As a result, it's a lot easier to anticipate other player's moves. The only hidden information is other players' hands.

Unfortunately, there's not a lot to be done about other players besides blocking them. In addition to the symbols needed to make sets, each card also has a number from 1 to 4. Instead of playing them in a set, cards can be played for movement. You must move exactly the number printed on the card, but you can play more than one card to travel further. (And the Grand Canyon bonus gives +1 to anyone who has claimed it.) While players may not pass through other players' pawns, it's hard to block someone because there are always at least two ways to get where you want to go.

The rules say that if you end movement on another player's space, that sends them back to the starting space. We haven't played that way. Not because we're opposed to "take that" mechanisms, but because, um, I have failed to read the rules correctly. So in our games, a player can race to a park and draw cards until they either fulfill the set requirement for claiming it or give up and pursue another goal. As written, the rules allow more aggressive interaction compared to the passive aggression the way we played.

From reading about how the second edition came about, the developers are committed to playtesting. So I wouldn't be surprised if they tested various blocking rules and found this one worked well for most players. But I also wonder if it incentivizes staying in the start position collecting enough cards to make a set. If so, that's unfortunate because our games started with a mad scramble to get to the first park you want to claim. It felt a tiny bit like the first episode of a new season of Amazing Race where Phil drops his hand and teams sprint off in a journey around the world.

Trekking absolutely delivers on its theme. Your goal is to visit National Parks and, by gum, that's what you do in the game. You might go deep by collecting everything you need to claim parks or you might zip into the visitor center, collect a souvenir, and race to the next park. Either way is a viable strategy. Maybe do a bit of each. The important thing is to get out there and experience some amazing places.

Each time someone claims a park, they get to take the card with a picture and a few sentences about the park. Then a new park comes out for everyone to find on the map. It's a natural way to learn a bit more about the National Park system but not so as to make it feel like an educational game. "When can we go to Carlsbad Caverns?" is a direct quote from our most recent game.

I'm not going to say that Trekking the National Parks makes Ticket to Ride irrelevant or whatever. It's not necessarily a game that holds up to hundreds of plays. Fundamentally the interaction between players isn't competitive enough and the puzzle of getting points isn't engaging enough. And yet, Trekking does an excellent job of evoking the wonder of travel.