Originally conveyor belt sushi solved a staffing problem. It replaced human servers with a never-ending train of self-serve dishes. The system also lowers the barrier to sampling what can be an exotic delicacy. No need to struggle with a name or make guesses about what you are ordering. If something looks good, just pluck it from the conveyor.

Similarly Sushi Go! introduces card drafting to an audience that might not have tried it otherwise. You start with a hand of cards (ranging from 7 for a five-player game to 10 for two players) and select one card to play. When each player has chosen a card, everyone reveals their card at the same time and passes their hand around the circle. When all the cards have been played, score up the value of the cards you've played. After three rounds, the player with the highest score wins. That's more or less the game. 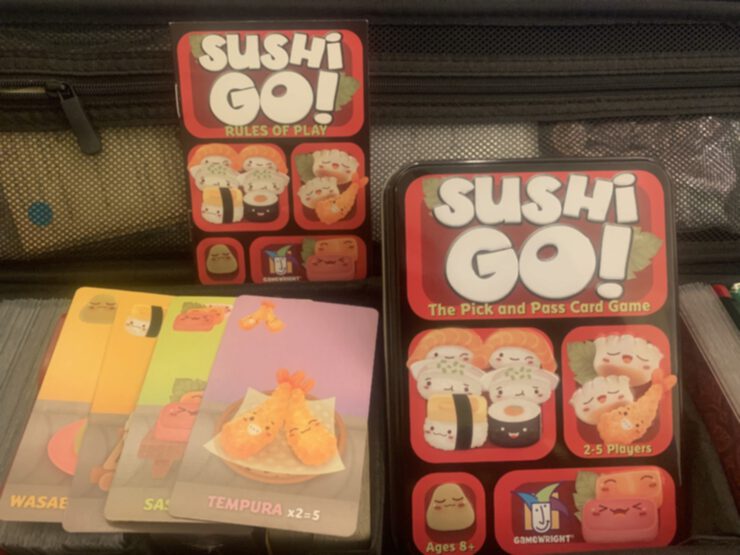 I've put Sushi Go in my Quiver card case. The metal box tends to lose it's lid and I like having a copy with me when I travel.

The genius of the Sushi Go comes from the various card types and how they score. Tempura only score in pairs. If you only collect one, you don't get anything. If you have two, that earns you 5 points. Sashimi works the same way except you need three to score 10. Dumplings score just one if you have only one, but increase in value as you grab more. Maki rolls only score if you have the most or the second most number of rolls printed on your cards.

It won't be obvious until you start playing, but the variety of combinations means you always have tough choices. Tempura will usually be a safe bet, but once you pick one, there's pressure to grab the second if you see one. Sashimi creates even more pressure since you need three. Collecting maki rolls stops making sense once you have claimed the majority, but maybe the hands you haven't seen have enough for someone to catch up? If someone else starts picking dumplings, it might be best to take some so they can't run up a high score.

And then there is the wasabi/nigiri combination. There are three types of nigiri (egg, salmon and squid) worth 1, 2 or 3 points. But if you play wasabi and then nigiri, the score is tripled. Wasabi without nigiri is worth nothing. That means wasabi has the potential to combine with squid nigiri for 9 points. Or you might not get anything if everyone else takes all the nigiri before you get a chance. As a result, there are times you might want to take nigiri knowing that the next player down the line will put it on their wasabi if you don't.

Experienced drafters will recognize this as an example of "hate drafting". Only there's not the bad feeling often associated with the term. For one thing, the cartoon sushi just look so darn happy. But more relevant, taking nigiri gives 1-3 points to the person who takes it, so it's not just hate drafting. Toward the end on the round, you might find yourself choosing between several cards that have no value for you, but do prevent the next person from scoring. Technically that's hate drafting too, but it doesn't feel malicious because what else can you do?

Chopsticks cards allow you to swap them with a second card from a later hand. If you get stuck with them during scoring they have no value. Obviously they are best obtained early if at all. Holding them means the person giving you cards must be careful not to pass on easy points. Normally it doesn't matter if you pass a tempura pair, for instance, because without chopsticks only one can be picked. It's an interesting change of pace.

It's a bit odd to think of chopsticks from a thematic perspective. Wouldn't everyone start with them on your table? How do they help you grab an extra item later? Are you returning used chopstick? Perhaps it's best not to think on it.

Puddings, however, fit so well. As they are desserts, they don't score until the very end of the game. When the three rounds are over, the people who collected the most puddings split 6 points and the people who have the least puddings split a 6 point penalty. So it's important to keep pace with other players when it comes to puddings. But it comes at the cost of not taking cards that will score points in the current round.

Sushi Go can be played by almost anyone. All you gotta do is take a card. I've noticed that younger players might go after a goal (often maki rolls) without understanding that other cards will help them score more points. That's part of learning how to play well and not just how to play. In the meantime, it's satisfying to achieve that goal and randomness means they might get a decent score anyway.

It's sometimes easy to dismiss simple games like Lost Cities and Sushi Go. After playing a few times, it feels like there's not much more to learn. Since the rules are so sparse, it can feel like the theme could be almost anything. A bit of luck seems to matter more than skill. Besides, it's just one mechanism and doesn't that get old quickly?

And yet, new possibilities emerge the more times you play. By remembering the cards you've seen, watching what other people have played and knowing the distribution of cards in the deck, you can gain an edge by drafting higher-value cards. In that way, Sushi Go requires skills not dissimilar from the foundational skill in poker.

Everything, from the theme to the art to the distribution of the cards to the details of how they are scored, about Sushi Go works. Yes, it's a light family game. But it also provides an interesting challenge for the most experienced players.

Also published on Board Game Geek.