If this were a review of the Lost Cities iOS app I'd describe the game in abstract terms:

Lost Cities is played with a deck of 5 suits. Each suit includes cards numbered 2-10 plus three coin cards. Both players are dealt 8 cards to make up their hand. The goal is to score the most points by playing cards into your personal tableau. Each suit goes in its own column and cards must be played in increasing value. So once you play the green 4, you can no longer play the green 2 or 3.

Cards score at their face value, but as soon as you start a suit you lose 20 points. So if the first card you play is the 4, that column is at -16 (-20 + 4). Before you play any numbers in a column you may play a coin card to increase the value of that column for you. One coin doubles, two coins triple and three coins quadruple. Coins also increase the cost of the column, so starting with 3 coins means that column costs 80 before the first number is played. Each number, however, is also multiplied when scored.

Instead of playing a card, you may discard a card into one of the 5 shared discard piles (one per suit). After you play or discard, you must draw the top card from either a discard pile or the deck. As soon as the deck runs out the game is over. In addition to scoring for the face value of each card, you score 20 points for laying 8 or more cards in a column. Coin cards count for getting to 8, but don't increase this bonus.

You get the idea. Due to limitations of screen size the app doesn't display illustrations on the cards and simplifies the iconography to numbers, coins and colors. "Lost Cities" could easily be a name like Gin Rummy or Klondike that's evocative without really relating to the game itself.

This, however, is a review of the physical game with fanciful illustrations of lost cities that you aim to explore. In particular, the 2019 edition that includes a 6th expedition: 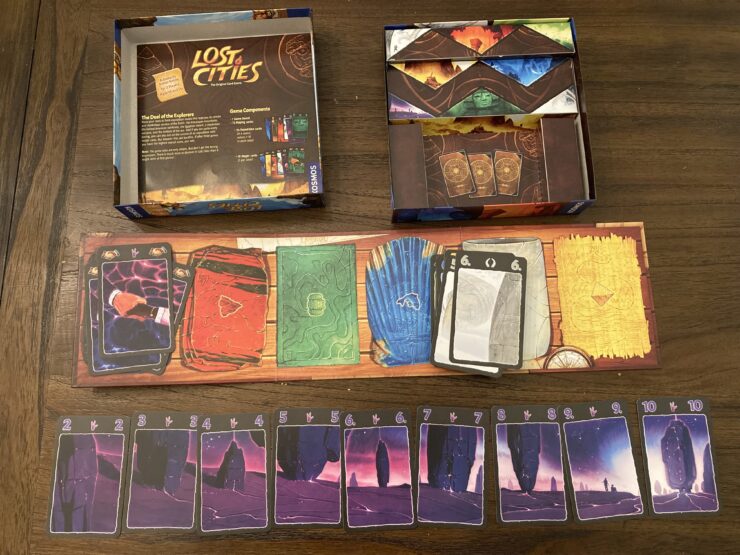 These cards suggest a very different way of explaining the rules. It's not "suits" but expeditions! We must play higher cards because we can't afford to backtrack in our quest to discover the lost city. The multiplier cards aren't boring coins but rather handshakes that increase our commitment to that one expedition. Discarding cards means the other player may acquire the clues we've gathered, so beware of that. And, of course, expeditions require spending resources that might not be recouped by discoveries.

Holding the extra large cards with beautiful images showing exotic locations feels extravagant. Ordinary playing cards (4 suits using aces to mark the discard piles and face cards as handshakes) would work nearly as well from a mechanical perspective. But that will never result in drawing a giant head buried in drifting snow or a jungle waterfall or a city surrounded by volcanic lava. The illustrations add weight to the decision to play or hold or discard each card.

Now to be fair, it's also the case that you'll learn to focus on the number and suit on the top of each card while taking no notice of the art. Most of the experience of playing Lost Cities is in the realm of the abstract with the theme fading into the background. So the cards serve the purpose of attracting new players, justifying a few of the rules and sparking the imagination when players do notice the illustrations.

Of course this is true of all games. When you first play Wingspan, there is a delight in discovering how each card has a gameplay purpose thematically tied to the species it depicts. Peregrine falcons hunt birds with small wingspans. But after playing a bit, the peregrine falcon card becomes a mechanism for (potentially) tucking another card for points. Even strong themes lose their power when the goals and actions of the game take center stage.

Some reviewers talk about how the theme of Lost Cities is "pasted on". I suspect they mean that it could have been replaced with any number of other themes. Perhaps. But it's also a theme that's purely additive and fits the mechanics nearly perfectly. Neither the mechanisms nor the theme has been compromised in the process.

Not to pick on Wingspan, which is generally considered to have an excellent theme, but it doesn't hold up if you overthink it. Requiring the sacrifice of an egg or two before playing bird cards seems thematic until you notice the egg used to play a hummingbird comes from a mallard nest. Lost Cities doesn't simulate archaeology any more than Wingspan simulates avian ecology, but both produce sensations appropriate to their themes.

The 2019 edition adds a purple expedition to what appears to be an extraterrestrial megalith city. It's mostly a way to add length to the game, from what I can tell. It adds variety even if you simply substitute it for another color and keep the number of expeditions at five. (Or drop down to four to speed up the game even more.) All the art has been updated and it's possible to lay out each expedition to see what the original painted panoramic looked like.

The new art changes the wager card from what looks like a bet between rivals at the explorers club to a simple handshake. It suggests an agreement between the expedition and a local guide, which works just as well thematically. Hiring a guide or three would, of course, raise the expense of an expedition while increasing the value of your discoveries. I appreciate that each expedition has a different sleeve illustration that fits with its locale. What doesn't change, oddly, is that the handshakes are always between a large white and a slender black hand. More variety would be nice.

Lost Cities feels simple because it doesn't have a lot of rules. Just pick one of 8 cards in your hand to play/discard and pick up a new card from a discard pile or the deck. Playing a turn comes easy when there are cards that can be safely played (once you play a 2, it doesn't hurt to play the 3 in that color) or discarded (if both players have played a number in a column, the handshake cards are worthless). This is the multiplayer solitaire situation.

At other times the decisions come hard. Starting a game with high cards can be something of a curse because you give up the opportunity to play any lower cards if you play them and they clog up your hand if you don't. Playing a high card early also lets your opponent discard lower cards in that expedition freely. The eight slots in your hand are your most precious resource.

Meanwhile, playing low cards early can pay off even if you don't have the high cards to support them. You'll draw roughly half the deck and there's a good chance you'll be able to play more valuable cards later. In fact it can be a good gamble to play an uncovered handshake card despite the risk you won't reach 20 to break even. If nothing else, it immediately frees up a slot in your hand.

Maybe you're better off discarding uncovered handshakes since it puts the decision about what to do with it on your opponent. But this is also a gamble because they might have some high cards ready to play on that expedition. Toward the end of the game, discarding handshakes might tempt the other player to pick them up even though time runs short to take advantage.

Ending the game has strategic implications too. Obviously you don't want to miss out on scoring cards from your hand when the game ends, so you might chose to draw from a discard pile rather than hurrying the end game by using the draw pile. But if you are in the lead, ending the game sooner is usually the right move. These are by no means easy decisions.

Scoring at the end of a round is, unfortunately, a bit of a chore. It's not hard and you shouldn't need paper to do the math. If you prefer, there are sites that do the math for you, such as the one I maintain. Waiting for the totals can be a dramatic moment, I suppose, but it's always a bit of a disappointing way to end a game.

I would now like to address valid and invalid criticisms of Lost Cities:

Lost Cities is the sort of game that manages to offer interesting decisions while also being comfortably familiar. It comes quite close to being a perfect experience for two players with the single (and minor) flaw of requiring a few moments of scoring at the end to determine the winner.

« Bosk: Better than the sum of its parts Solving Agricola: Family Edition »