For a game about falling leaves, Bosk is surprisingly tidy. The game starts with each player taking a cardboard tray from the box. Each tray contains 8 trees (two each numbered 1-4), 36 wooden leaves, 8 leaf cards and a squirrel. The map is two-sided. One side for 3 or 4 players and the other for two. During the spring phase players take turns placing trees in the grid intersections. The summer phase scores each row and column according to who has the highest and second highest sum of numbers on their trees. Fall, of course, consists of trees dropping leaves (or the squirrel) in the direction of the wind that shifts each round. After dropping its leaves, each tree is returned to the tray. And the final phase, winter, scores each region according to who has the most and second most leaves. Clean up the leaves after scoring and everything goes back in the box ready for the next game. 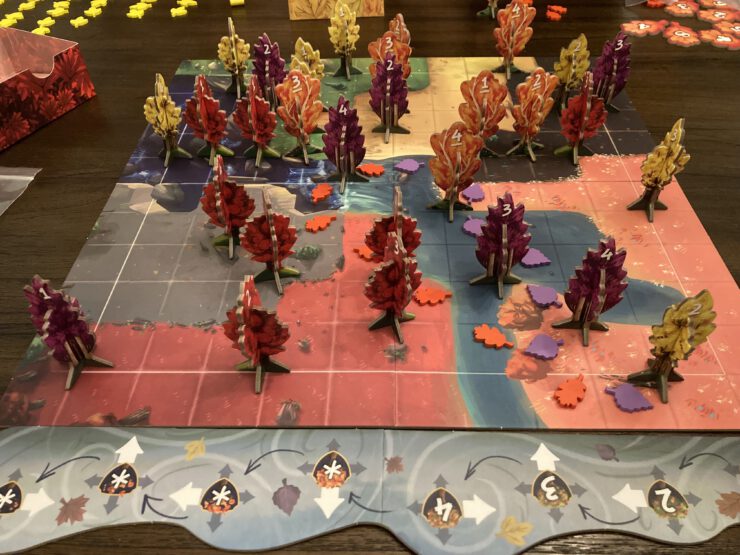 As you can see, Bosk is lovely to look at. It's very well designed, but I do have a number of quibbles:

None of these harm the game in any meaningful way. I'm sure these factors were considered and decisions made based on aesthetics and cost. It's just I wish slightly different decisions were made.

The rulebook explains the game well and includes helpfully illustrated examples throughout. Across the bottom of each page are facts about various National Parks,2 which are entirely superfluous, but add to the theme. Scoring is described in the text and again in chart format. One nit I have is that notes, tips, reminders and exceptions are printed in small caps whether they are critical to pay attention to or not. The also clutter up the main flow of the rule narrative.

On the back of the rulebook is a summary of the setup, phases of play, and a copy of the summer and winter scoring tables. There's a hiker to mark the starting player and track the trail that's being scored. The score track board has two sides so you can chose whether to snake after each multiple of ten or start a new row. When fall comes, the wind track board3 fits neatly on the map edge chosen by the last-place player and a wooden arrow tracks the current wind.

As for the game itself, I find it breezy with some tricky decisions along the way. Placing trees is critical for both the summer scoring and ensuring you can claim territory in the fall. Summer scoring tends to be spread more evenly than winter. Unless you are able to be the only one to have a tree on a row or column, you aren't going to build a significant lead.

Meanwhile, territory control in the fall is surprisingly fluid. Saving a large numbered leaf card for the later rounds means you can cover up opponents who seemed to have a safe lead. Alternatively, people who use their 8 leaf card early efficiently grab a share of several regions all at once. Squirrels, of course, are agents of chaos.

Bosk is a perfect information game. There's no element of chance and it's theoretically possible to calculate the best possible move. In some games that can lead to analysis paralysis and long waits between turns. Bosk avoids that trap by giving players narrowing choices. In chess, the best-known perfect information game, pawns block the movement of back-row pieces for several turns until the game opens up. A wider range of mid-game choices gives players more to ponder. But in Bosk, each tree placed reduces the number of open trails and scoring possibilities.

The shifting wind in the fall season also limits the possible moves. It's usually not hard to decide which of the two trees marked "1" to use in the first round because of the direction of the wind. Picking how many leaves to drop (or whether to use your squirrel card) is simplified by calculating the number of leaves needed to reach the board edge. Each leaf dropped is constrained by where the previous leaf fell. By the end of four rounds when the choice of trees is opened up, there are only four trees left to pick and the situation on the ground has become more clear.

That's not to say the choices are easy. Especially in the second-half of the fall season it's agonizing to decide whether to solidify a region you already are winning or spread out into an area where you might score second place. Sometimes a tree that seemed to be minimally valuable at the start of the fall turns out to be the game winner in the final round.

Bosk scales well from 2-4 players. Spring usually goes quickly since it involves nothing more than placing a tree. Fall is more involved, but you can safely plan your turn while other people are playing because the wind usually favors a small number of options each round. The scoring system means it's hard to be too far behind.

Now I do find the actual scoring of the game to be a bit tedious and underwhelming. Summer in particular is a lot of 2 and 1 point moves with the very occasional trail scoring 3 for someone. Especially with 4 players it goes on a long time with little to show for itself in terms of score differential. Winter is better because there are fewer regions with higher scores. In fact winter provides a greater share of points in all but the 4-person game:

Note: this doesn't account for various tie scenarios which can reduce the total score of a trail or region. There is also the quite rare case of 3 or 4 players tying for first in a region that could result in more than 8 points being awarded.

At its core, Bosk is two separate games chained together. The spring game doesn't feel important, but it does set the stage for the fall. Scoring in summer serves the primary purpose of spreading out trees so they aren't clumped in the center or some other strategy designed to capture regions in winter. Fall tests players' plans and ability to adapt to changing situations.

Planing trees reminds me a bit of Go. Partially that's because they go in the intersections and not the squares. But also because each placed piece has subtle implications down the road. Placing leaves feels a bit like Carcassonne's farms in that territory can be stolen by devious players. For me the problems with the game pieces and the somewhat underwhelming summer scoring are more than made up for by the complex puzzle of the two games.

This review was also published on Board Game Geek.

« A comprehensive guide to investing: The condensed version Lost Cities: The espresso of card games »