I'm writing this review having never played Ares Expedition with other people. In my defense, there are just two points of player interaction:

It's not hard to spot the lineage of Race for the Galaxy in the first point1 and the original Terraforming Mars in the second. The rest of the game is a deck of 200+ cards that can be played into a tableau. Each player has their own set of cards representing projects their corporation has completed in their efforts to claim a high score. Gameplay consists of each player managing their own collection without much need to see what others are doing. 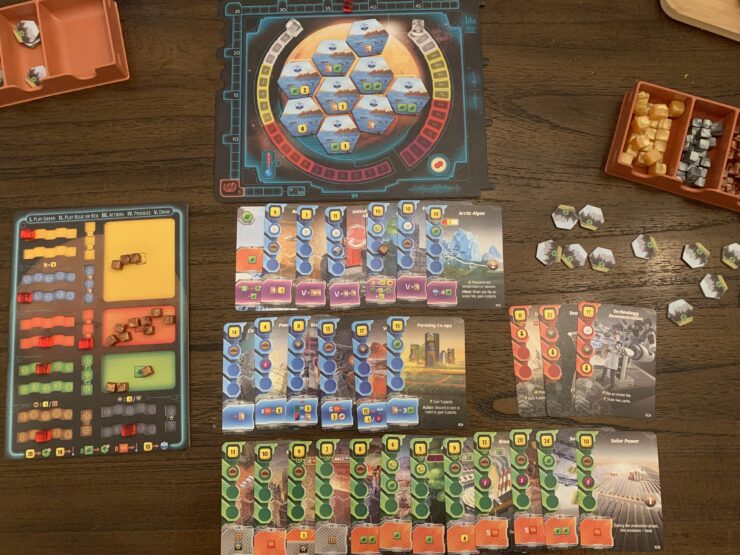 Solo mode handles the two points of interaction by introducing a dummy phase deck and making terraforming Mars the sole victory condition. Five times through the dummy deck2, 25 turns, and the game is over. Is Mars terraformed? If yes, congratulations! If no, tough luck. Either way, the score is, at best, an interesting aside.

Ares Expedition progresses on the schedule one would imagine actual terraforming would follow. Mars starts dry, lifeless and cold. That doesn't change much as corporations build infrastructure. In the fiction of the game, private companies earn MC3 income by creating moneymaking projects and from subsidies awarded for increasing global parameters. Some projects make future projects cheaper to build4 and others trigger bonuses when certain conditions are met.

Some cards grant income (MC, heat or plants) based on the number of cards deployed with specific symbols. For instance, there is a Cartel card that increases your MC income based on the number of cards tagged with the Earth symbol. Once you tap into the Cartel, you start looking for Earth-based projects to pump up your income. I'm not sure how realistic this is, but it sure is thematic.

Whether you complete each of the global parameters in the time allotted depends largely on whether your collection of completed projects efficiently work together. Part of the joy of Ares Expedition comes from discovering winning strategies. For instance, you might:

In fact, you might use all three of these strategies in concert since most of the events in the deck are space projects and cost quite a bit. When playing solitaire, it's necessary to have a plan to increase all three global constants. Standard actions, which are always available as a fallback, just cost too much. Failing to build projects that generate heat, oxygen and oceans during the Action phase will almost certainly cost you the game.

Score doesn't matter in solo games, so there are a number of cards that don't have much value. Other cards are too expensive for what they are worth since the costs assume score matters. Still other cards turn into deep bargains with a meaningless score penalty. The game requires evaluating which projects are worth building and discarding the rest. It's not a tightly balanced game.

I do see a potential criticism of the game when played against others that doesn't really exist as a solo experience. If a player lucks into a decent combination of cards early on, they will enjoy a definite advantage throughout. The rules specify a few cards that should be used for the first time you play the game, which give a more even start. After that, you should play with the "advanced" rules that allow players to discard and replace any number of cards in their initial hand before picking from the two corporations they were dealt. This won't solve the randomness problem completely, but does go a long way to mitigating it.

The other a way out of a bad start is through research. My first phase choice in solitaire is always Research, which allows me (with the bonus for using the phase card) to draw five new cards and keep two. Between the ten card hand limit and the restriction from using the same phase twice in a row, I do need to deploy cards between research phases. If I'm lucky, the dummy deck will turn up the Research card when I play Development or Construction so I get another draw 2/keep 1 phase.

Since cards can be sold for 3 MC at any time, it's advantageous to research early. (By the end of the game, 3 MC isn't that big of a deal.) I can't prove it, but I get the feeling that every time I've lost a solo game, I could have won with a bit more research. Making Mars livable won't just require good ideas, but the right combination of ideas. It's possible humanity won't ever find a combination that works. You can't fight physics and expect to always win.

Ares Expedition works for me because. and not in spite of, the giant pile of cards that might not come out in an order that facilitates an efficient engine. I said in my review of Wingspan:

Maybe I haven't figured out the nuances of the game, but too many decisions seem to be inconsequential.

Thinking about it, what I'd want from Wingspan is a lot less worrying about whether I've acquired the right food for my birds and a lot more time digging through the bird cards to find interesting combinations. That's exactly what Ares has done. None of the decisions are wasted because even rejecting a bad idea has value when it comes to research and development.

The engine exists so that your discoveries mean something and only tangentially so that you win the game. I can understand preferring a shorter, more balanced, cleaner game like Race for the Galaxy, but that comparison misses the point. Terraforming Mars functions in the hard science fiction space where sometimes the best plans fail.

I initially bought the game from Target, but returned it when I found the "Collectors Edition" was on sale for the same price. This version of the game has trays for holding the cubes and tiles. It also features double-layer player mats that corral the cubes that collect there. By the end of the game, you'll be getting dozens of cubes in the Production phase and it's all too easy to knock them into the wrong section of the board even with the indentation.

I printed up a fan-designed game board that's easier to use than the one that came in the box. The game comes with 5 phase tiles that don't serve much purpose playing solo. (I'm well aware of what phase card the dummy has turned up.) I use those tiles to keep track of how many times through the deck I've gone instead.

In the final time through the dummy deck, I just lay out the dummy phase cards in order face up. (The rules allow you to order the cards how you want rather than shuffle in the last 5 turns.) My usual order is:

Putting Construction at the end gives me the option to deploy an event card in the final turn, if I have one. Typically, my own phases alternate between Action and Production to run my engine as often as possible.

The player mat includes counters for the various incomes. I find those helpful, but I always recalculate just before doing Production because I often forget to update when I play a card. It can be handy when planning ahead to have an idea of your income, but it really only matters in the Production phase.

See also the discussion of this review on BoardGameGeek.

« My year at EDB Sushi Go!: Lowering the barrier for drafting games »