I have a theory that when it comes to ratings and reviews, some games benefit from a first mover advantage. For instance, Dominion was the first deck-building game many people played. As a result, Dominion is also the bar a deck-building game must clear in order to be considered "good". There can only be one first time of discovering the pleasure of deck building, so it's hard to stack up against the classic of the genre. If you disagree, maybe you haven't played enough Dominion to learn all of its tricks.

Race for the Galaxy enjoys that same advantage in the tableau builder space. Not that the game is overrated. More that it's the authentic masterwork of the genre that casts suspicion on copycats such as Ares Expedition and Wingspan. 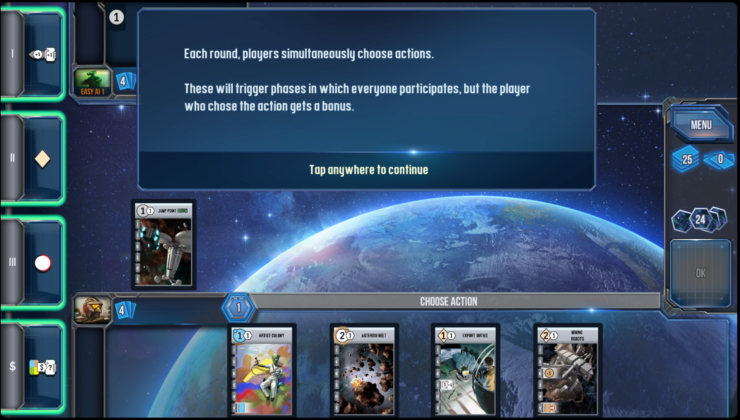 As of this writing, I've played Race over 50 times on Board Game Arena and the iOS app. That's probably not enough to fully understand the intricate strategies of the system. It would have been hard to get in a fraction of that number with a physical copy, however. The digital implementations ensure I'm playing the rules correctly and eliminate the common complaint about the game's symbology. If you have any question about what a card does, you can select it and get a description of exactly what the symbols mean. After a game or two, it's not really that confusing anyway.

Thematically, Race is a 4X game in the vein of Master of Orion. Each turn you may select from 5 difference phases:

If one player picks an phase, everyone else gets to do that action too. Picking a phase guarantees that phase will this turn and provides a bonus unique to the phase. This is the principle form of player interaction.

Playing a card into your tableau generally requires discarding cards from your hand equal to its cost. Goods are represented by face-down cards taken from the draw pile. So the cards are pulling at least triple-duty. Paying for cards with cards presents the trickiest decisions in the game. Inevitably you'll find yourself being forced to either discard a card you wish to keep or passing up an action.

Fortunately, some cards give discounts or bonuses for playing specific types of cards or taking specific actions. "Investment Credits", for instance, reduces the cost of all developments by one card and "Public Works" grants a card draw after playing a development. Even better, some worlds can be conquered militarily without spending any cards at all. Of course, you'll need to dedicate space in your tableau to military cards which generally don't help with the goods economy. 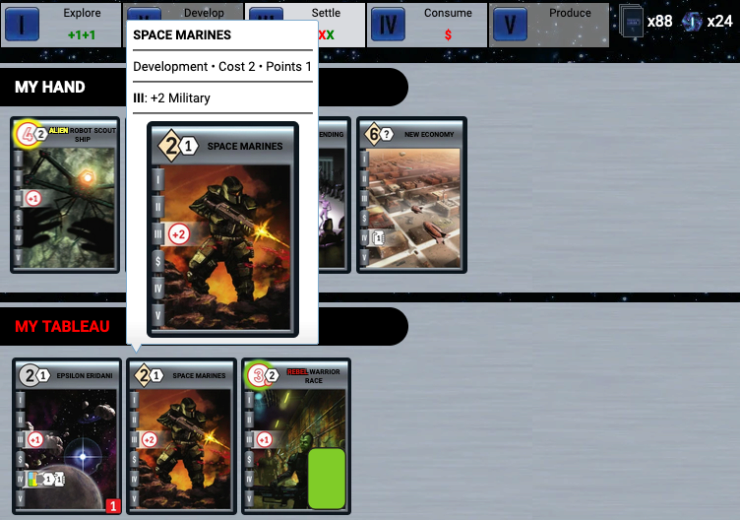 There are three ways to earn victory points:

The game ends when either all the victory point tokens have been taken or at least one player has at least 12 cards in their tableau.

On the whole, Race for the Galaxy's cards feel thematic. "Space Marines" boost your military by +2 and the "Alien Rosetta Stone World" makes it easier to settle alien planets. Exploring turns up possible worlds to settle and developments to invest in. Producing and consuming goods requires planning ahead.

It's handy that most of the game can be played simultaneously. Of course, that means there's very little player interaction after the phase selection and before the final turn. I find myself focusing on my own game and forgetting that other people can end the game before I'm are ready. Players will want to maximize their last turn or two by converting cards and goods into victory points before it's too late.

Perhaps this is where the digital games let me down. I don't see a dwindling pile of victory points or a growing collection of cards in front of other players. Playing with strangers turns phase selection into almost a random card flip. Sure I can look a their tableau and guess what they will do, but without knowing their personality I'm missing the psychological dynamic of the choice.

Having played Ares Expedition and hearing that it basically ripped off Tom Lehman's ideas, Race wasn't as easy to grok as I'd expected. For instance, there are 7 phase selection cards for 5 possible phases. Why? Well two of the phases have two options for the bonus. So you can either Explore with 1-1 (drawing a total of 3 cards and keeping 2) or 5-0 (draw a total of 6 and keep 1). In the Consume step, you chose to either trade goods for cards or consume goods for double victory points

The 5-0 bonus is a good choice only when you really need a particular type card and keeping one extra card won't make a difference. Basically that's the end of the game. Meanwhile, trading goods for cards helps in the early game when you have windfall goods and need cards more than victory points. So the options are welcome. What's odd is that there are separate cards for each option. Ares Expedition has two possible bonuses for Construction and just lists them both on the same card:

I suspect the reason Race has separate cards has something to do with the advanced two player game in which each person plays two phase cards which might be the same phase. Whatever the reason, it's just another quirk to learn to live with. There's no material difference between deciding which Explore option to use during planning or a moment later when the phase happens. But it really does matter which Consume bonus you plan for since you might have wildly different needs by the fourth phase of a turn.

Race for the Galaxy can be unforgiving. There are duplicate cards in the deck, but you can't play duplicates in your tableau. The app helpfully grays out duplicates so you know you should discard them. But BGA doesn't warn you until you try to play a duplicate. At that point you're stuck with a wasted action unless you are lucky enough to have an alternate card to play. It's part of the puzzle of the game to avoid this situation, I suppose.

While I complimented the thematic cards, I'm much less a fan of the game's generic (and gray) sci-fi setting. The card art isn't bad, but it doesn't contextualize what you are doing. It's not an empire you are building, but just a tableau of cards. The starting worlds aren't where you came from, but just a nudge to build an engine to gain victory points.

Compare to, say, the four factions of Star Realms which provide a narrative base for that game. You don't need to read backstory because the design of each faction's ships and bases evoke what that faction is all about. Additionally, cards make cameos in other cards including across faction lines. Consequently, the universe of Star Realms has a coherence that Race for the galaxy lacks.

This brings me to the "first mover" concept in the opening paragraph. I've played Star Realm thousands of times (really) on the app and it's one of my son's frequent requests in person. So it should come as no surprise that I prefer the world-building of Realms over Race. Indeed I'm reluctant to review Star Realms because my many plays bias my opinion. Maybe Race has a better setting since it doesn't collapse the entire universe into four distinct cultures. Isn't the over-reliance on the familiar why I've grown tired of Star Wars?

Each time I play Race for the Galaxy, I become more forgiving of its rough edges. I'm avoiding mistakes and starting to see more possibilities to pursue. The 2-player game "for experienced players" feels like a real test of strategic thinking now. It's an excellent game. But it's an excellent game that I had to play dozens of times to appreciate. Most of those plays left me slightly annoyed and confused about what made so many people love this game so much.

See also: comments on BGG, including from Tom Lehmann, the designer of Race for the Galaxy.

« Working on a Discourse theme: Setting up your environment