Eagle-Gryphon sells a 7-card promo pack for Baseball Highlights: 2025. To spoil my review, this is a purchase for coalitionists.

First up is a correction of a misprinted card: Mordecai Marichal. I recently got a copy of the Cyborg Pitchers Expansion. As mentioned in the manual, it's missing the Pinch Hitter icon. You could use a sharpie to add "PH" to the original card, but it's nice to have an official copy.

CP-178 is highly situational. If you have 0 or 1 other Cyborgs, it's not much use except for it's unexceptional revenue generation value. Being able to Pinch Hit gives it an opportunity to become a much more useful card. There's no reason to keep the old card in circulation, if you have it. If you haven't acquired Cyborg Pitcher, this card gives you a taste of the expansion. It would be more useful if you had the extra cyborgs, however.

Mordecai Brown's nickname was "Three Finger", which sounds like the backstory for a cyborg pitcher. He actually had "4 and a half fingers on his pitching hand" because a childhood accident. His SABR bio also notes:

Not long after, he fell while chasing a rabbit and broke his other fingers. The result was a bent middle finger, a paralyzed little finger, and a stump where the index finger used to be.

Juan Marichal is probably best known for his part in the Giants-Dodgers rivalry. He was the Giants' ace to the Dodgers' Sandy Koufax. The two players were also involved in one of the ugliest brawls in baseball history. That said, his legacy seems to be that of a supremely excellent natural talent. 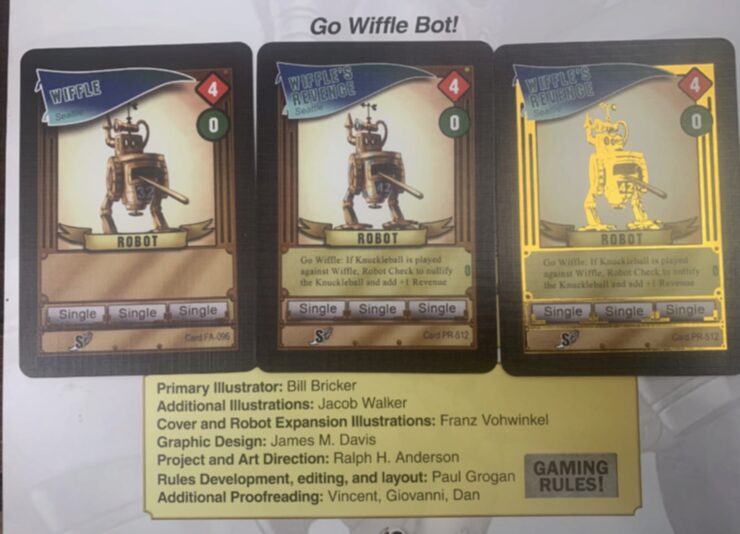 Wiffle is a robot that hits singles. If you need singles, there's no better choice. If you don't need singles, it has nothing, literally nothing, to offer. Knuckleballs reduce all hits by one base. Singles are wiped out by knuckleballs, so that action utterly negates Wiffle.

Foil cards are cool, I guess. They don't have any game play value, but do look nice on display. YMMV.

Wiffle Bot is something of a mascot for Baseball Highlights: 2025:

It's just about a perfect summation of the aesthetic of the game. The weather vane sells the idea that these are steam-era machines cobbled together to perform a specific (and somewhat bizarre) purpose. 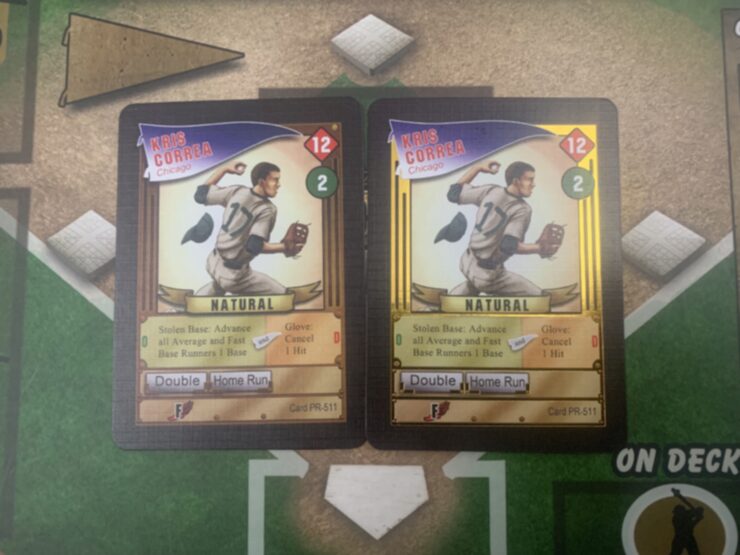 Baseball Highlights captures the complicated relationship baseball has with star players. While top players cost teams substantially more than other players, they can't dominate every game. Kris Correa costs 12, which will certainly be the only purchase in a buying round if you can afford him at all. With a double, home run, stolen base and a glove, this card tilts any game it's played in.

But he can't play in every game. For a cost of 12, you can buy two or maybe even three free agents. So this card is perfect for the end of the season/series to push you over the top. Still a strong card, but maybe not as strong as getting two mid-range cards if you have several games left to go. 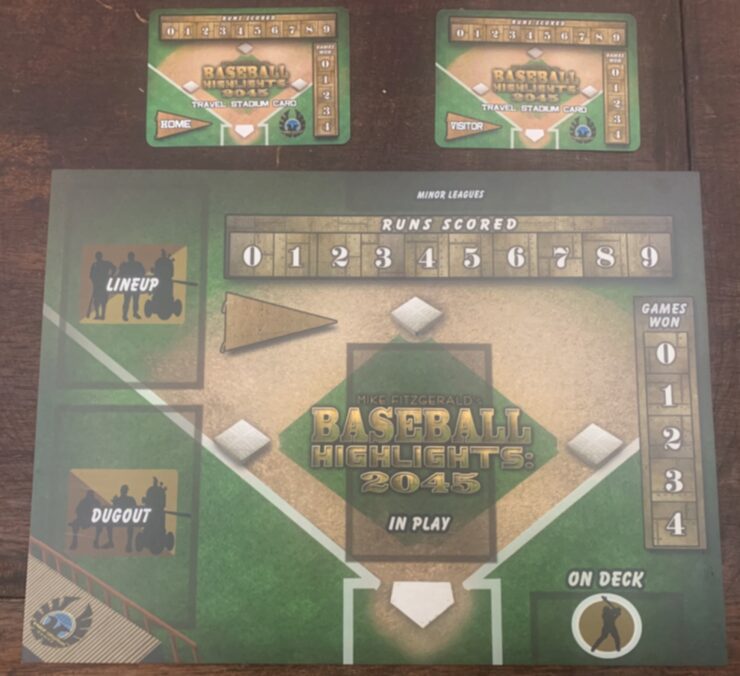 These cards are a touch mysterious when you see them in photos online. There aren't any instructions in the package2 either. Instead of the regular Baseball Highlights card back, these are double sided. One side has the "Home" pennant and the other has "Visitor". If you have some small markers (I used 1cm colored cubes) you can track the score. games won and base runners for each player. That way you can pack the game for travel. It is possible to use the base runner markers from the game, but chits from the Spring Training starter game are too big. Looking at photos online, the wooden pawns from the base game would be uncomfortably large too. 8mm cubes (or dice) are ideal.

Unlike the full stadiums, there are no designated spots for the lineup, dugout, on deck circle, in play or minor leagues. But you can make your own conventions and keep the piles sorted. For me, on deck is tucked under the bottom, minor league is turned sideways on one side, the lineup and dugout are on the other side and the in play pile is on top of the stadium. You do need to be a bit more careful than normal to avoid bumping markers on these cards since there's very little space.

Last year I bought a Quiver card case. It's allowed me to bring all sorts of card-based games with me when I travel. After getting these stadium cards, I packed my Baseball Highlights cards on a recent business trip. In the evenings I relaxed with a few solitaire games and having nicely printed stadium cards made the experience so much more relaxing.

By my accounting 3 of these cards (the two foils and Wiffle's Revenge) add nothing to my enjoyment of Baseball Highlights. The corrected Mordecai Marichal fixes an obvious balance issue. Kris Correa is a high-cost, high-impact card that can swing a game. The stadium cards are a wonderful addition if you plan to pack up the game and take it on a trip.

If you are a bigger fan of foil cards or Wiffle Bot, I could see this being a home run. For me, it's a soft hit that drops in front of an outfielder.

« Star Realms: Luck is the residue of its design Sharing an Outlook calendar with GCal »