Star Realms is a deck building game. That means you start with a deck of 10 cards of which 8 (Scouts) do nothing but provide 1 Trade to buy more cards from the trade row. Unlike deck building games you might be familiar with such as Dominion or Aeon's End, the market isn't static. Instead, the Trade Row is populated by 5 random cards drawn from an 80-card Trade Deck.1 Each of those cards cost from 1 to 8 trade and is replaced by another random card when purchased. Since you draw 5 cards,2 you'll need to buy cards that will, in turn, provide more trade later on to buy more expensive cards. A reasonable strategy is to simply buy the most expensive cards you can afford in your turn.

The other two cards (Vipers) you start with provide 1 Combat each. Star Realms pits players against each other directly with each player starting with 50 hit points.3 Obviously it's going to take a long time to whittle that away with the starting deck. So it helps to buy cards that provide a lot of firepower. 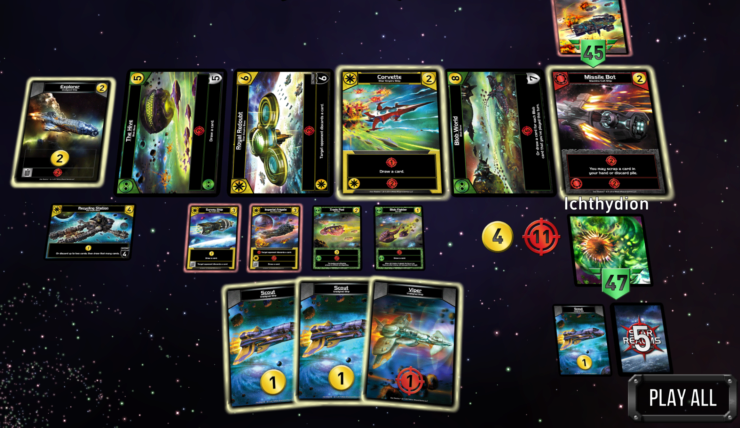 Some cards are Ships, which are discarded at the end of your turn. Other cards are Bases, which remain on the board until they are removed by Combat. Of the bases, some are Outposts, which must be removed before any other bases or the player can be targeted. Since regular bases provide their effect each turn they remain on the board, most players remove them from their opponent every chance they get. So a reasonable strategy is to collect bases when they show up in the trade row.

Each card in the trade row comes in one of four factions:4

Concentrating on a faction's strength is already a reasonable strategy, but some cards also include ally abilities that trigger if you have at least one other card of that faction in play. So there's a strong incentive to concentrate on one or two factions so that they activate ally powers often.

There are also cards that represent a strategy unto themselves. Stealth Needle can copy one ship that you've played that turn. If you acquire Space Needle, you'll want to get high powered ships to copy. Embassy Yacht grants a two card draw if you have two bases in play. After you acquire it, bases look more attractive in the trade row. Cards like this represent high variance strategies. Lucky draws will trigger large advantages and unlucky draws fizzle these cards.

Players' strategy preferences must submit to the current state of the trade row. If you like playing blue but there are no blue cards you can afford, well, it's time to find an alternate strategy. Even if you start with a strategy based on the initial trade row, you might find nothing you can buy fits into that strategy later on. As cards are bought and scrapped from the trade row, it completely turns over every few turns.

Fortunately, some strategies pair well together. Bases tend to extend the length of the game, which gives the red faction time to thin your deck. Conversely, green and yellow can speed up the game with extra card draws and higher than normal combat. So once you've started on a strategy, you could very well build on it indirectly with complimentary purchases.

Luck of the draw, both in terms of what cards you can chose from in the trade row and the order that cards into your hand, strongly influence the outcome of a Star Realms game. Even the best players have win rates in the 60-65% range. With over 2,000 games, my win rate is 51%. But considering I was at 44% with 635 games, that's not bad. When I play against the Hard AI these days, I usually win. 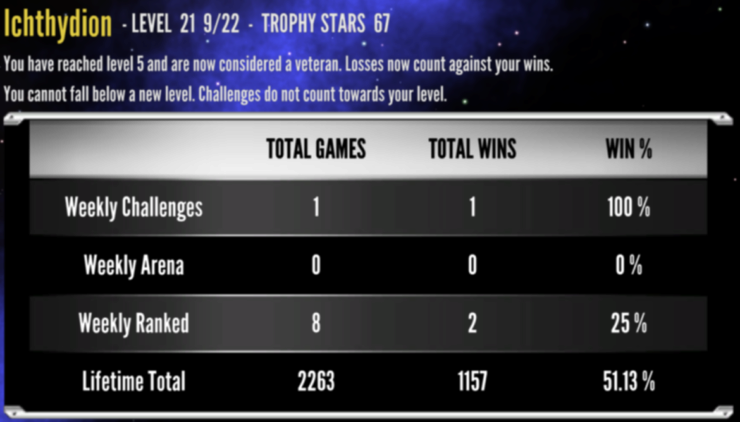 How do good players beat the luck of the draw? Only by remaining flexible in their strategies and changing course when the environment dictates. Maybe shift away from a base strategy when you grab a Stealth Needle or take advantage of a handful of low cost cards of the same faction when they turn up. Sometimes grabbing a card that fits your opponent's strategy better than your own is the best play.

Every game has a built in shift from trade to combat. Early on players will often pass up combat cards to get more trade in their deck. At the end of the game it's not uncommon to let trade go to waste rather than spending it on cards that don't help finish off the opponent. Mastering Star Realms begins with learning to properly time this shift. As always, the state of the trade row and each players' deck must be considered.

Self-scrapping cards facilitate strategic shifts. Explorers, which are always available for purchase, start off giving two trade each time their are played. But when the shift to combat happens, they can be scrapped for two combat as well. When you buy an Explorer, you are paying for both the regular trade ability and combat upon scrap ability.5 Failing to scrap out of a defunct strategy is a common mistake newer players make.

Speaking of new players, Star Realms avoids the chess problem, despite its high skill ceiling, thanks to its ever-changing market. Deck builders with a fixed marketplace tend to reward planning out purchases in advance. Players do need to adapt to the small amount of luck of the draw and there is a timing decision to shift from building an engine to cranking out victory points. These factors just hide the inevitable conclusion that experienced players have an advantage even if they've never seen that particular combination of cards in the market.

Dominion offers player interaction only in the game ending conditions and a handful of attack cards. Every card in Star Realms, even lowly scouts, impact the other player's plans. Again, the design of the variable trade row makes all the difference. New cards are randomly drawn, but players have agency over which cards leave the market.6 Purchasing a card just because you have enough trade might not be a good move if it reveals the card your opponent wants.

The app has a weekly Arena mode, which changes the rules of the game. A few weeks ago there was a variant where the trade row was completely replaced after each turn. 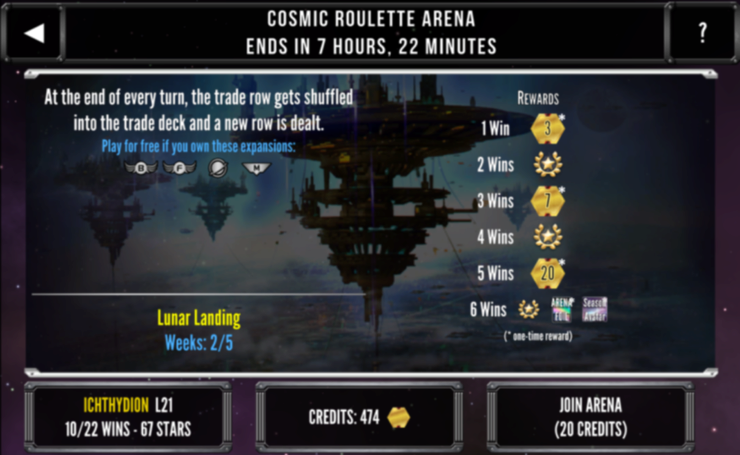 I noticed I stopped paying attention to the other player because I couldn't prevent them from taking cards and I had to wait until they were done to start planning my own turn. One little change disrupted the flow of the game and made it significantly less interesting.7 The ever changing, shared trade row plus hit-point-based victory keeps both players engaged from start to finish.

Star Realms has many expansions at this point and a seamlessly cross-platform app. Each addition adds twists, variation and new ways to play. There is, however, more than enough strategic depth in the original core set to make those extra cards almost unnecessary. It's a masterwork of the genre.