This question is mostly an excuse for sharing some research I've been doing. It essentially replicates the data Shog gathered a few years ago. I think the results suggest some systemic and social solutions to our ongoing problems with question quality on Stack Overflow (and increasingly other large sites). In particular, I think we've created a system that encourages bad questions at the expense of reasonable ones. Fixing that system will depend on having an accurate understanding of what motivates people to ask questions.

One way to find out what causes people to ask questions is to ask them. We've been doing that research, but it's hard to avoid a skewed sample. People who respond to interview requests (such as the call at the bottom of the recent blog post) are probably not typical. Fortunately, we have a massive sample of users who have asked a question, received various types of feedback, and either asked another question or not.

For this experiment, I looked at:

I also looked only at events that occurred within 28 days (4 weeks) of the initial question. That's plenty of time to accumulate feedback data and gives a standard cutoff for when we stop looking for followup questions. In other words, if a question gets a comment, vote, answer or whatever more than 28 days after it was asked, that feedback is not counted in this analysis. (Also, questions younger than 28 days old have been filtered out.)

To have a really complete model, we'd ideally have access to all the factors that go into a user asking a question. It would be nice to know, for instance, how many programming problems the user faces in a week. Then we'd want to know how many of those problems have solutions findable via Google and an estimate of how skilled each user is at searching. Unfortunately, we don't know these inputs. Instead, we're going to look at factors that are recorded in our database:

You probably know what all but the last of those mean. I'm using the AFINN lexicon I used to evaluate comments on Interpersonal Skills. It's not particularly geared toward technical prose. (Variations of "kill" and "die" are rated -3 on a -5 to +5 scale, but would usually be neutral on Stack Overflow, I'd guess.) But I was able to verify that comments flagged and deleted as "rude or abusive" do, in fact, have a lower sentiment score than average. In the future, it might be better to use a lexicon tuned for technical writing. (I recently learned of this paper which is a step in that direction.)

I used R's lm function to generate a simple linear model. Compared to physics models I've used in the past, the fit is not particularly good (adjusted R2 = 0.01819). But that's to be expected in a social science context. There are just too many factors we could never account for to make a robust model. The important thing is that this model gives us a good idea of which actions are significant to future participation plus the direction and magnitude of that influence.

Here's the model summary for how many followup questions a user asks based on the response to their initial question:

Allow me to draw your attention to the coefficients one at a time:

Not using this method of calculating sentiment and according to this model. It's possible a better lexicon will turn up a stronger effect. It's also possible the effect is only significant with extremely negative (and positive) comments. But I think it's far more likely that the effect of getting a comment drowns out any effect of how the comment was worded.

I should also point out that we are only looking at the effect on the asker themselves. Some questions are seen by hundreds or even millions of people. As much as we like to think comments are second class content, we put comments on questions in first class position: 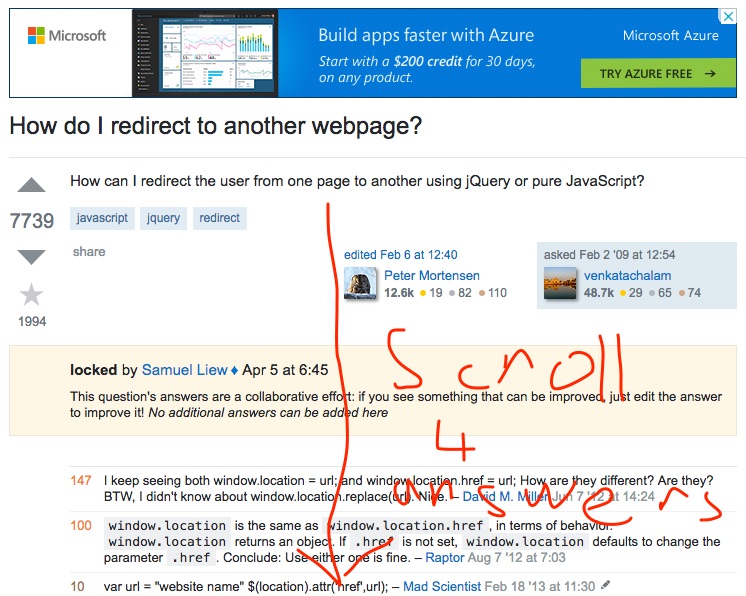 To casual visitors, question comments are more visible than answers. We know from talking to people who don't contribute that one reason is because they see discouraging comments on the site. In sum, leaving a negative comment on a bad question:

Unless we are confident that non-users ask worse questions than we already have on the site, this seems like a poor design.