Last time I explained how Git repositories get larger and larger as people commit changes. Today I'm going to explain how we stopped adding PDFs willy-nilly. If I weren't writing a blog post, I could just write the answer to the implied question:

We stopped committing PDFs every time we built the EDB documentation.

But since I am writing a blog post and in order to thank you for clicking on a link to read this post, I'll press on.

Getting computers to do our work

When I started my first full time job, I ran across The Joel Test. It was a 12-question diagnostic that gave programmers an idea of the quality of their team. Believe it or not, the first question was covered in the first post in this series:

Do you use source control?

Can you make a build in one step?

This takes a little explanation. On the first day of learning to code, you put your code into a file and use another program (usually either a compiler or an interpreter) to turn that code into an executable program. For "Hello World!" programs, that's often the only step. But when you start to build something more interesting, it's pretty likely you'll need more files and more steps.

Now 3 > 1, so we failed this test. The good news is I could toss those steps in a shell script, which got us down to one step.1 That one step might take the better part of an hour, but it was just one step. So second test passed!

This was excellent because it allowed us to also pass the third test:

Do you make daily builds?

Joel wrote another whole post about daily builds that convinced me to set up an automatic process to verify nothing added in the last 24 hours broke the build. When you have one-step builds, it's much easier to schedule.2 Initially I didn't tell anyone I was doing this. So when someone else submitted a change that didn't build, I'd walk over to their cubicle and let them know they'd screwed up. In retrospect, some of my co-workers might have thought I was a bit of a jerk.

You can't stop the computers

The Joel Test is a bit out of date now. Services like GitHub make it much more likely that a software team uses source control. Package mangers not only simplify one-step builds, but make sure all the external dependencies are up-to-date as well. Instead of daily builds, modern projects often build whenever new code is added.

There are lots of methods to accomplish this, but I'm going to talk about GitHub Actions, which is the tool we use. It's part of a larger class of tools called continuous integration (CI). Sometimes they are called continuous delivery or continuous deployment (CD). And just to be safe, we can use the catchall acronym of CI/CD. While these are not exactly the same idea, they all conceptually work something like my "smart" thermostat: 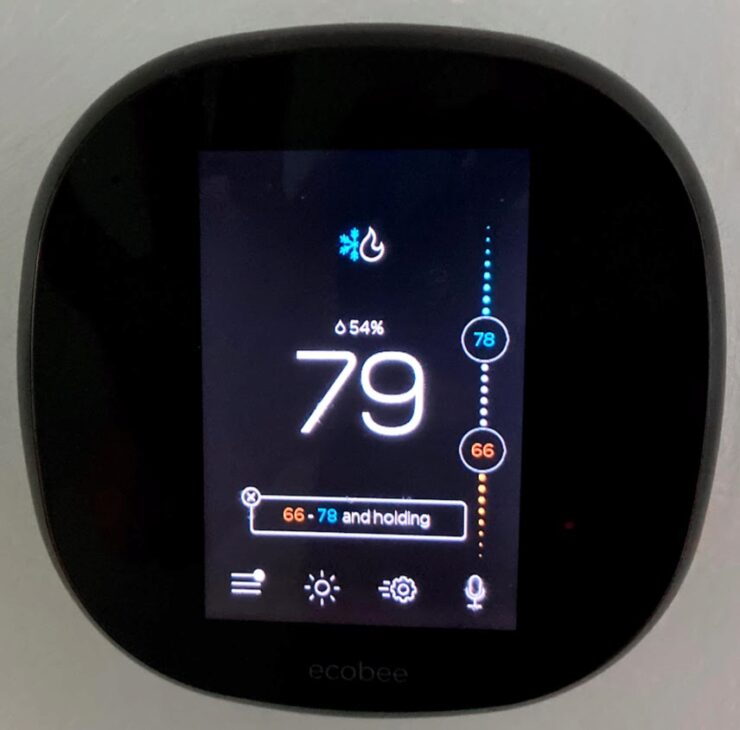 A regular thermostat monitors the temperature so that it can turn on the AC when it gets too hot and the heater when it gets too cold. My thermostat does that too. But it can also play "You Can't Stop the Beat" from the hit musical Hairspray if you say the magic words:

It requires a little work to set up, but once that's done, a bunch of computers will spring into action when anyone3 says "Alexa, play You Can't Stop the Beat". GitHub Actions work the same way. To illustrate, let's look at some of the code4 that was causing the problem. We'll start with the trigger:

GitHub Actions (AKA, "workflows") are defined by YAML files stored in the .github/workflows/ directory. But you don't need to know the details to understand what's going on here. The first line names the process. It's not really used by anything expect as a label that makes it easier to find all the times the workflow was executed. It's handy to name your workflows something sensible, but there's no requirement to even name them at all.

The rest of the lines define the triggering event. You can almost just read it by removing the punctuation:

But this is really terrible grammar that only a computer could love. Let's reword it:

When there is a push on the develop branch . . .

I haven't talked about branches just yet, but this is feature of Git that allows people to work on different projects using the same code without stepping on each other's toes. It creates an alternate timeline that won't interfere with other timelines until someone decides to merge them. The important thing is that this particular workflow happens every time someone submits a change to the develop branch.

What happens? Well that's defined in the second half of the file:

That's a lot. You can try the ignore-the-punctuation trick, but I'm not sure it'll clear anything up. Best to dive in line-by-line:

Maybe computers are just too good at their job?

We're starting to lose the plot here. All we've done so far is define a workflow that runs three commands on a computer (we don't care where, only what type) whenever someone makes a change to a particular timeline (branch) of our source code. Once we set this up, computers will mindlessly do this work every time7 the trigger happens.

What are those three steps? Well they use three different methods8 of defining steps, but they boil down to:

The crux of the problem, as I previously explained, is that we checked in PDFs files which caused our repository to grow without limit. So all we need to do is eliminate step #3 there.

Trouble is we want to keep PDFs indefinitely. So we need to store them somewhere even if we don't put them in our repository.

Netlify to the rescue

Now building PDFs isn't our only GitHub action. We also have an action on our main branch to deploy our production website to its home on the internet. And we also have a workflow to deploy a copy of the site to a staging location. Both of these locations are hosted by Netlify.

As it happens, Netlify uses Merkle trees. Don't worry—I had to look it up too. Remember how I wrote last time:9

I was underselling how much Git uses hashes. The "working tree" is really a Merkle tree in which each branch is a hash pointing to either a file or a sub-tree, which is itself a Merkle tree. This is convenient because it means we can access anything from an individual file to the entire project tree (and everything in between) with a single number. Netlify can find our content, including all the old versions of our PDFs, with a quick and efficient lookup.

The observant among you might think, "But wait, Won't that introduce the same problem that Git had with these binary files?" So first, gold star. And second, only if you want to clone the entire history of the project to your local machine. Putting the entire history of Git means everyone who uses the repository needs to download every version of every binary file.10 But Netlify is only showing people whichever version of the file they happen to be looking at. As long as the Netlify people are cool with keeping our history, anyone can access old PDFs we've published indefinitely.

What has been generated once can be generated again

Sometimes when working on a problem, it can help to re-orient on the big picture. Why did we want to keep PDFs indefinitely? Truth is we only want to keep some of our PDFs for all time. Specifically, we want customers to have access to the documentation of major releases of our products forever. Even after a product reaches its end of life, there are all sorts of legitimate reasons to look at its documentation. We don't particularly care about saving old PDFs if the only differences are minor. If we're doing our job correctly, the best copy of the documentation is the most recent one, so most of the PDFs we've created have been overtaken by events.

That said, the nifty thing about Git keeping all that history and using commodity compute power is that we can more or less re-generate any PDF we've ever created in the past. All we need to do is:

The key is to tag the major releases so that we can easily find them again. We may never need it, but it's nice to know we have this option too.

With not just one, but two ways to get copies of old PDFs, we're ready to stop checking them in each time we build develop. You can see exactly how I did this by looking at this commit. All I did was remove the GitHub Action that created PDFs and move the PDF generation code into the GitHub Action we use to build to production. That way the PDFs will be copied to Netlify where we can access them, if needed.

If you read this far, you probably are looking forward to next time when I explain how we rewrote our Git repository.

« Prototyping with shell scripts A day in Reserve »