For some reason most people seem to be born without the part of the brain that understands pointers. Pointers require a complex form of doubly-indirected thinking that some people just can’t do, and it’s pretty crucial to good programming.—Joel Spolsky, "The Guerrilla Guide to Interviewing (version 3.0)"

In programming, pointers are variables that contain not values, but memory locations. It's a seemingly simple concept that causes considerable confusion even if you do have "the part of the brain that understands pointers". They also produce the strangest bugs. One of my earliest C programs crashed unless I was debugging it. Eventually I discovered the problem was my use of pointers.1

Now I don't know if Joel is correct that some people can never learn to understand pointers. But I do know that it's easy to get turned around while using pointers such that it feels like I've lost my mind. Baba Is You produces that same feeling when it requires "a complex form of doubly-indirected thinking" to solve.

It doesn't start out that way, of course. Like all great puzzle games, Baba Is You introduces ideas incrementally. The goal of every puzzle is to move to the winning item. For instance, this puzzle requires you to move Baba (the rabbit-type creature) onto the flag in order to win. 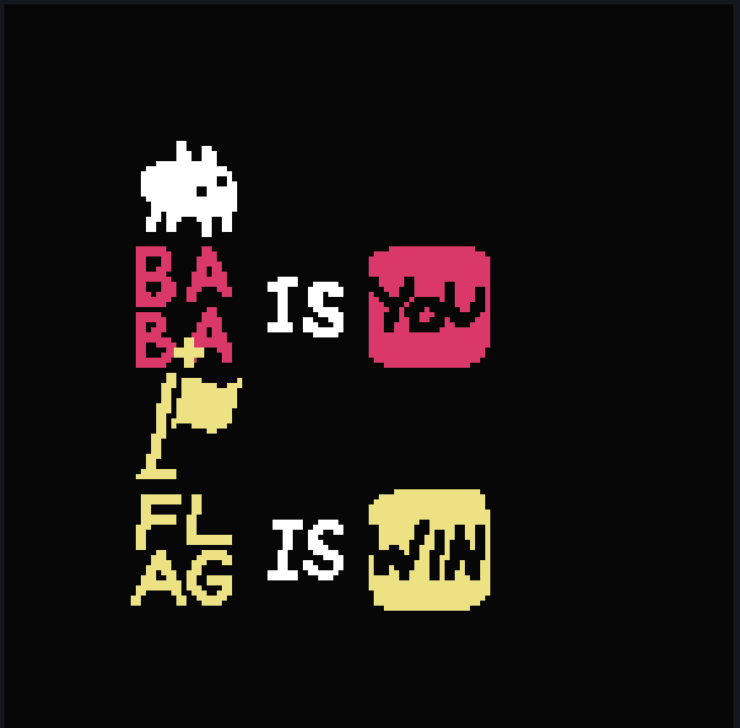 The text forms the rules of the game:

Every level has to have an X IS YOU rule or there would be nothing to control and nothing to claim the win. The other rule you need is an X IS WIN rule, but that's not always set to start the puzzle. In this puzzle, all you have to do is step on the flag to win. Each word in the rules can be pushed around so sometimes a puzzle will have an incomplete win rule that you will need to assemble before you can win.

By the way, I created the puzzles I'm showing and you can play them if you download the Baba Is You level editor and enter the code I provide. This trivial level is ZYXN-3PGU.

Puzzles frequently use rules malleability. Even this easy puzzle is trickier than it first appears. If the player presses the down arrow to go down, they will push the word BABA out of the first rule. Since there is no longer a rule defining the player and since a player is always needed to complete the puzzle, the game instantly stops. You can only resume the puzzle by resetting it (with the R key) or undoing the most recent move (Z). Expect to use these keys regularly.

It has the same two rules, but there doesn't seem to be a way to win since I didn't provide a flag. The level isn't that hard to solve with a little trial and error. (Again, you can play it with the level editor.) How would you approach this problem? I'll let you ponder a solution while I explain another aspect of the game.

Pushing the text blocks around was inspired by another puzzle game called Sokoban, which is Japanese for "warehouse keeper". It's about a awkwardly designed warehouse that's too cheap to give workers a forklift. So they have to move boxes by pushing them. The catch is you can get boxes stuck if you push them into a corner or along a wall with no door. It's a somewhat tedious game. Most levels involve a little trick to make space and then a bunch of repetitive maneuvering to get each box in its place.

Baba Is You suffers this problem occasionally, but most levels can be solved in less than a minute once you know the secret. The rich variety of possible rules helps. Some levels are box-pushing puzzles, but there are plenty of other mechanisms to play with. Baba moves through themed sections of the world: lake, island, forest, space, volcano, etc. Each subworld introduces new concepts and typically has sections dedicated to specific ideas. New subworlds are opened up once you complete a specified number of levels.

There aren't any Sokoban levels in the game itself, but I was able to approximate2 one (CKNB-BV1G) with some of the more advanced rules. (It's wonderful to have a level editor to help understand how the game functions. It even hides "spoiler" words behind a setting so that you can be surprised in the actual game.) What's notable about this level is that none of the rules can be altered. Official levels always allow at least some rules to be altered, which is the charm (and challenge) of the game. 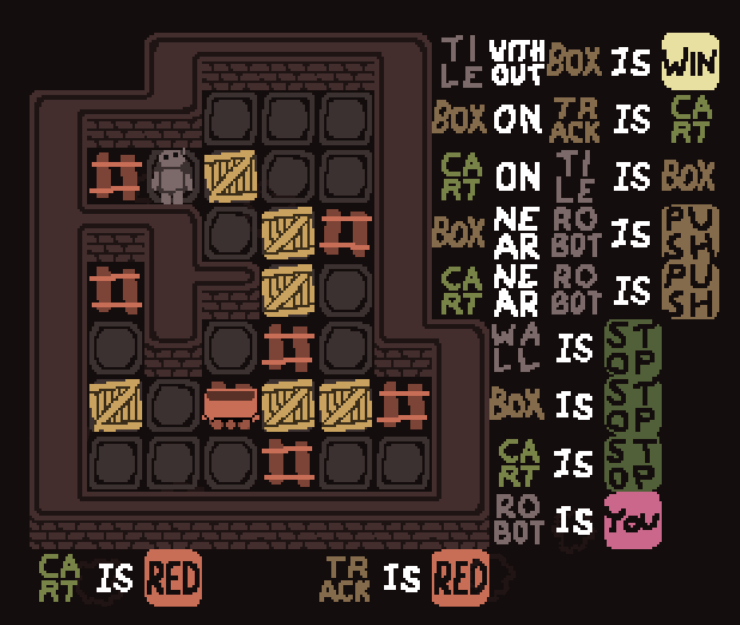 The Sokoban ruleset is about twice as long as the typical puzzle has at the start. Then again, it's likely you'll need to recombine the rules several times to reach the win condition. Sometimes you'll find yourself animating one object after another by changing the X IS YOU rule. Other times you'll rotate attributes, such as PUSH from one object to the next as needed. The only real limitation is access to the right word needed to create the rules.

Have you solved my puzzle? The answer is that Baba can also be the win condition. Here's an image showing how I will win by pushing the WIN text to the left: 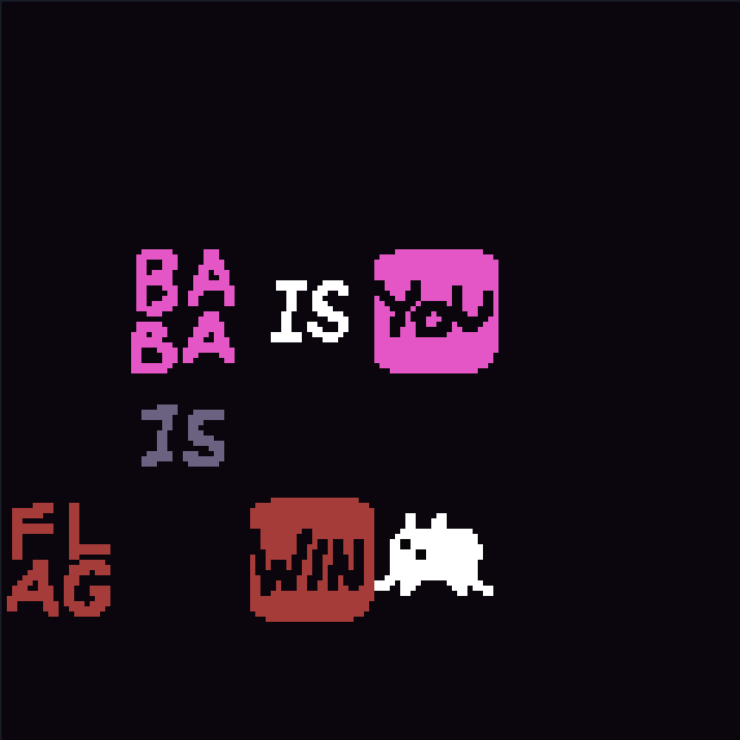 Since the player's avatar and the win condition are in the same location (because they are the same item), it's an instant win. Strange, right? But not all that strange in the world of Baba Is You. Moving the rules around causes the changes in the level in ways that often feel strange or wrong. And yet, they are always logical. The game never cheats even though it seems like cheating to do things like making your avatar the win condition.

I can't recommend the game enough. If you aren't sure you will enjoy it, I recommend trying out the original prototype which includes the first few levels of the final product. Even though I've played these levels in the past, I still enjoy playing them again to find alternate (and likely unplanned) solutions. It's an incredibly clever puzzle system with a generous supply of levels.

I did find a few levels too hard to solve on my own. Sometimes putting away the game and coming back after a night's sleep did the trick. But when I get impatient, I turn to Baba Is Hint an unofficial guide that give gentle (and not so gentle) nudges rather than simply providing the solution. I still haven't finished all the levels because I'm savoring them.

« Review of Dune: Part One A comprehensive guide to investing: The condensed version »