I wrote a short series for our internal blog at EDB last the fall. It's an introduction to our updated documentation system.

What if I told you that anyone can make EDB products better? I don't mean "anyone with deep knowledge of PostgreSQL internals" or "anyone with a technical background". I mean anyone and everyone. My story starts with a fairly mundane announcement. EDB is switching from our previous documentation system to what we call Docs 2.0: 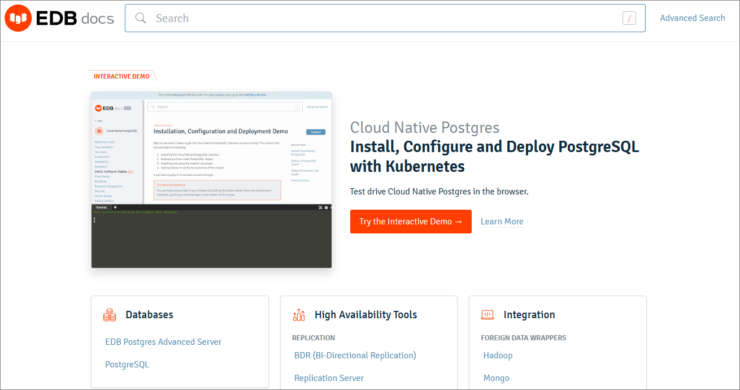 The design facelift signals to our users that EDB products will work with modern development environments. We've also added interactive demos to allow customers (and potential customers) to see features in action. However, I think there's an even more important feature that isn't immediately obvious: the Docs 2.0 content and source code is on GitHub. Users won't notice unless they press this button on the top right of (nearly) every page:

This takes you to GitHub where anyone can edit the source of the page directly. "Wait", I imagine you are saying, "What about Spam Guy?" (Spam Guy is the name my kids have given to whoever calls during dinner that my phone labels as "possible spam".) Fortunately, any change to documentation sources must go through the regular GitHub pull request process. Spam Guy can add nefarious links, but they won't show up on the page because the documentation team will reject the changes.

Other than the joy of rejecting spam, is there any reason to let outsiders edit our documentation? Well, in 2017 GitHub surveyed developers and found that 93% encountered "Incomplete or confusing documentation". There are many reasons for this, but one solution is to encourage documentation users to give feedback. Speaking of which, we also give users two options for providing feedback if they aren't comfortable editing the page: 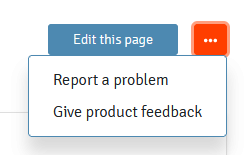 Both of these options open a GitHub issue using a custom template. That way the Experience Team can help customers understand our products (including documentation) better. As a bonus, issues are publicly searchable so that other users can learn from our responses. (And, yes, we can delete issues if they are spammy or contain non-public information.)

The process is a little different for Cloud Native PostgreSQL since the source for its documentation is currently on an internal repository. Instead of an edit button we offer a simple feedback button that opens a GitHub issue:

Since they're hosted on our public repository, anyone can respond. In addition, someone from the Experience or Documentation teams can elevate the issue internally so that we can address customer problems efficiently. We've built EDB Docs to flexibly handle a variety of use cases.

Working together even when we are a world apart

Recently we added EDB Cloud to Docs 2.0 which required people across the company and around the world to edit documentation. Fortunately, GitHub is built on the world's most popular distributed version control system. It allows anyone to get a copy of the entire source tree, make changes to the part they are responsible for, submit their changes to the central repository and make them available to the world. Generally speaking, this all just works. When there are conflicts that need to be merged, Git provides tools that greatly simplify the process.

Even better, GitHub provides a web interface that works well for people who don't already know Git. People who need to edit documentation frequently can clone the repository on their own machine and use the tools they are most familiar with. And people who only need to edit documentation occasionally can use an intuitive editor on the web. GitHub continues to improve the experience. (By the way, have you tried the new Codespaces editor?) All of this functionality came with the decision to use GitHub.

Of course none of this matters if people aren't actually contributing to the project. Getting ready for EDB Cloud put the system to the test. There was certainly a learning curve for us all, but we had 25 authors from around the world make 393 commits to production documentation:

GitHub: Not just for developers

Developers use GitHub as a simple interface to their source control software. And it is that. But we like to say that GitHub is primarily a communication tool. Because the tools were originally built for developers, they have an aura of requiring real technical skill to use. But when you look past the surface, GitHub isn't so different from any other collaboration tool. Issues are nothing more than a way for people to talk about the source. Pull requests are nothing more than a suggested edit. Think of it as Google Docs with a particular focus on what matters most to our customers.

GitHub makes it easier for anyone in the company to know what has changed in the EDB documentation and, more importantly, why it changed. Literally anyone (with internet access) can suggest edits to improve documentation. Remember how I said 93% of developers encountered "Incomplete or confusing documentation"? Well I'm willing to bet 7% of developers were too embarrassed to admit on an anonymous survey that they were confused. A big problem in documentation, perhaps the big problem, is gathering feedback from people who don't get it.

I'm not saying you are confused by our documentation. But I am saying your feedback could help many people who are using or considering EDB products. Hit the edit button if you see anything from a technical inaccuracy to a typo. And if you are reading the documentation and something seems incomplete or confusing, send us that feedback. It will help more than you know.